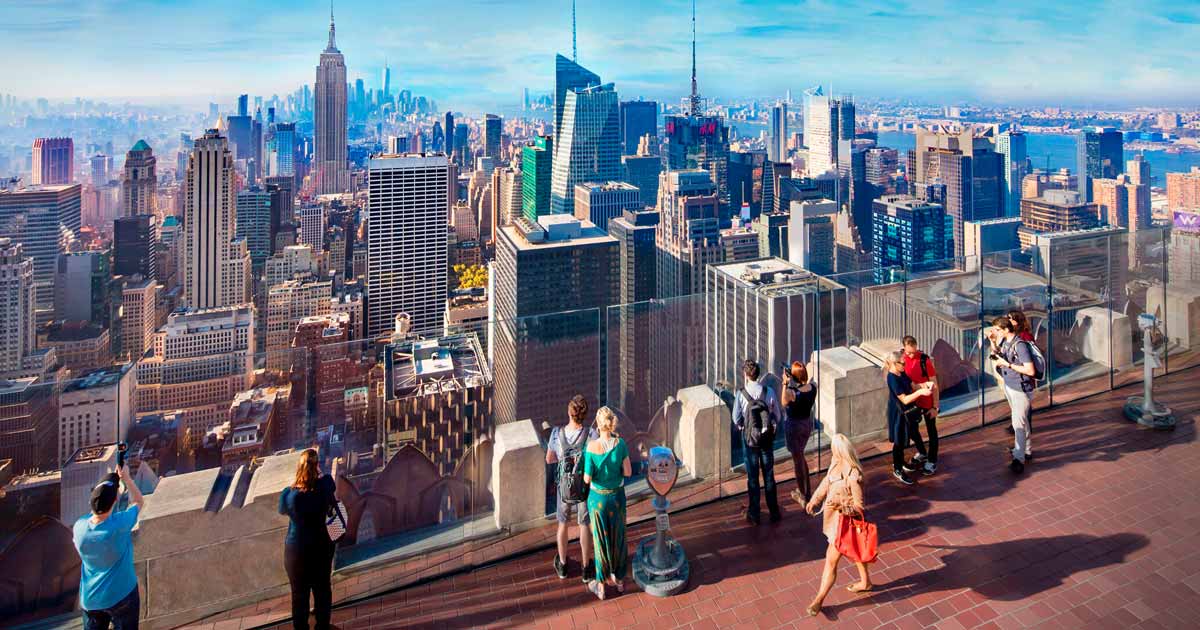 5 Tips for Visiting Top of the Rock

Always high on the list for many New York City visitors is Rockefeller Center’s Top of the Rock, the 70th-floor Observation Deck with astonishing views of Manhattan and beyond. Treat students to one of the city’s most uplifting experiences—unlike anything they’ve ever seen!

When the RCA Building (now known as 30 Rock) opened in 1933, the observation deck was the first attraction to open to the public. Inspired by a luxury cruise liner, it had Adirondack chairs, potted evergreens, and an outdoor refreshment bar to go with the knockout vista—and it became a sensation, drawing 1,300 visitors a day. The deck was closed in 1986 and, after extensive refurbishing inside and out, reopened as Top of the Rock on November 1, 2005.

Occupying the 67th, 69th and 70th floors, it offers jaw-dropping 360-degree views—including the close-up Empire State Building, around to Central Park, and extending all the way up to the Tappan Zee Bridge. The 70th floor is open-air, rather than bordered by safety glass, since it’s set back from the edge.

Which famous faces have been spotted on the rooftop of 30 Rock? From the early days, you can see Frank Sinatra and Gene Kelly singing New York, New York there in 1949’s On the Town. In more recent years, you can see everyone from Jimmy Fallon with Jon Hamm and Cameron Diaz having some fun with fans to U2 shooting their latest video. And then there are the countless Instagrams starring people from all over the world.

1. Nighttime is gorgeous, but mornings are magical too. Just after the 8 a.m. opening, students could have a more private experience and catch the beautiful light illuminating the Empire State Building and Midtown skyscrapers with a Sun & Stars upgrade, to visit twice in 24 hours.

2. Get to know the lay of the land with Top of the Rock app, free and available for both iOS and Android. Eye-opening features include the Viewfinder, to guide you around the NYC skyline, and the Wayfinder, to point the way to shops, eateries, and amenities all around the Rock.

3. A great way for students to visit is not only to reserve ahead (essential around the holidays), but to also purchase a combo ticket—bringing together a visit to Top of the Rock with a Rockefeller Center tour or a VIP pass for expedited entry, as well as access during peak sold-out times.

4. Photos are one of the most popular keepsakes, yet there’s more memorabilia to explore. The gift shop (at the top and in the Concourse) provides everything from T-shirts and mugs to magnets and backpacks.

5. Some other important info can be found on the site’s FAQ page. Be aware that you can’t see the Christmas tree or rink from Top of the Rock, and plan ahead to time your visit. With hours varying on select holidays, the elevators—which are part of the experience—first go up at 8 a.m., with the last ascending at 11:15 p.m. most nights and the observation deck closing at midnight. Be prepared for the line that winds its way through the mezzanine exhibition, including a photo op with the “Lunch Atop a Skyscraper” image, before you board. There’s no food or drink at the attraction—and none can be brought up—though there are plenty of dining options in the Plaza and the Concourse.

Top of the Rock tickets can be purchased here. Entrances and box-office ticket counters are located on 50th Street between Fifth Avenue and Sixth Avenue at the NBC marquee (with the “Joie” crystal chandelier inside) and in the Concourse. Check the Rockefeller Center map and the Purely Practical Guide for more info.

See you at the top!

Content and photo courtesy of Top of the Rock.