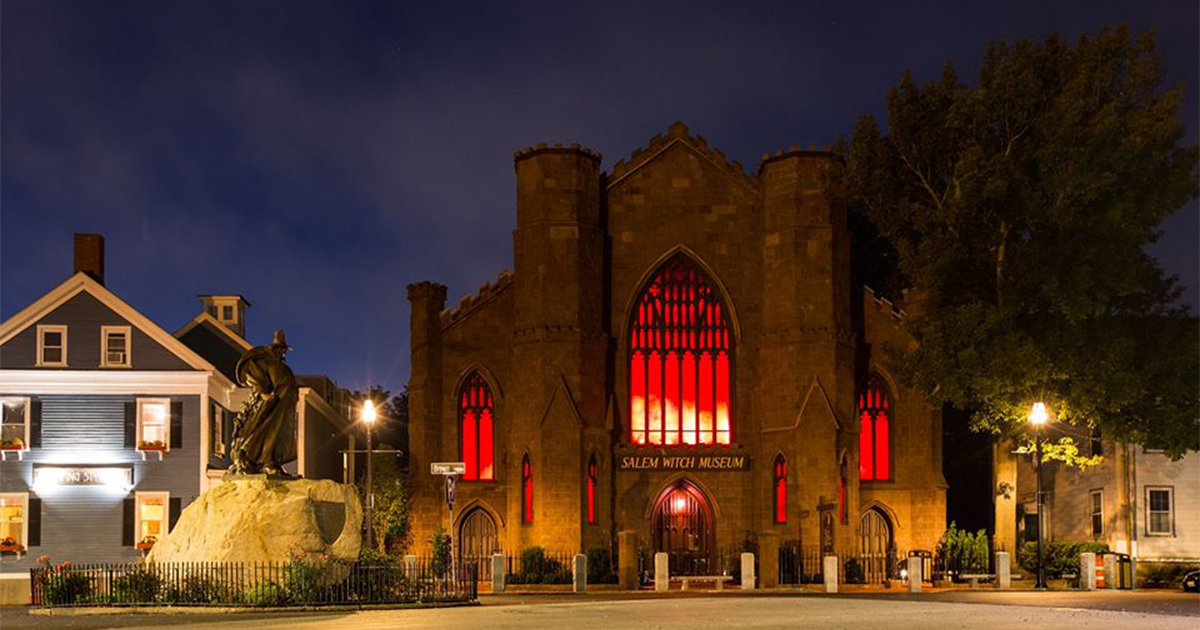 50 Years of the Salem Witch Museum

Since opening in 1972 in a renovated historic church building, the Salem Witch Museum has served as a distinctive local landmark and major contributor to the city’s cultural and historic landscape. For the past five decades, the museum has told the true story of the Salem witch trials of 1692 and provided context for understanding the phenomenon of witch-hunts and witchcraft from the fifteenth-century into the modern-day.

Public interest in Salem’s connection to the witch trials of 1692 was piqued by the publication and Broadway production of Arthur Miller’s play, The Crucible, in the 1950s. However, fascination with everything related to witches and witchcraft increased dramatically after several episodes of the TV sitcom Bewitched were filmed at various locations throughout Salem and aired across the country in 1970. The museum was founded shortly thereafter to educate the public about the 1692 trials.

When prominent North Shore business executive Biff Michaud took over the museum’s operations in 1980, he dedicated himself to making the museum more accessible and relevant to a new generation of visitors. Alison D’Amario, an English teacher from Topsfield, joined the staff in 1986. She designed an education program around the trials that could be adapted to schools, historical societies and business groups. Additionally, Michaud broadened the museum’s family appeal by working with the Salem Chamber of Commerce to launch “Haunted Happenings,” a simple, two-day family festival that has evolved into the popular month-long, city-wide celebration it is today.

Under Michaud’s leadership, the museum expanded its marketing initiatives to the group tour and travel market, both nationally and overseas, and translated the content of the museum’s core presentation into eight languages to accommodate its continuously increasing number of international visitors. In 1999, a second exhibit titled Witches: Evolving Perceptions was created to provide visitors with context to enhance their understanding of the Salem trials. The exhibit gives background on the development of witchcraft beliefs in Europe, describes how the image of a witch has changed and evolved over time, and highlights how the formula for a witch-hunt can be perceived in modern-day events.

In its continuing efforts to highlight the plight of the unjustly accused and maligned today, the Salem Witch Museum, along with other members of the Salem Witch Trial Tercentenary Committee, established the Annual Salem Award for Human Rights and Social Justice. This award is now granted by the organization Voices Against Injustice, previously known as the Salem Award Foundation. The purpose of the award is to recognize those who take action to alleviate discrimination and promote tolerance in the world today.

In 2010, the museum began a series of updates, starting with the restoration of the front façade of the building. The original structure was erected between 1844-1846, and was the Second Unitarian Church of Salem, and thus restoration efforts were a priority. The museum then went on to renovate the front plaza, expanding and making the front of the property more accessible and accommodating to visitors.

Updates to Witches: Evolving Perceptions have been ongoing since the winter of 2017, beginning with the creation of a new timeline of witchcraft history. This display gives a detailed account of the legal, social and religious changes that led to the massive European witch-hunts. A first edition of L. Frank Baum’s The Wonderful Wizard of Oz was added in 2019, along with several artifacts relating to early modern folk magic. In the spring of 2020, along with the installation of a recently recorded audio tour, a new tableau reflecting updated scholarship was unveiled.

Due to the impact of the COVID-19 pandemic, the Salem Witch Museum’s 50th anniversary celebration will be extended over the next several years. Among the plans for this milestone are a series of special virtual programs, an update to the museum’s front vestibule, and the installation of additional artifacts. Most importantly, the main presentation will undergo a major update and renovation.