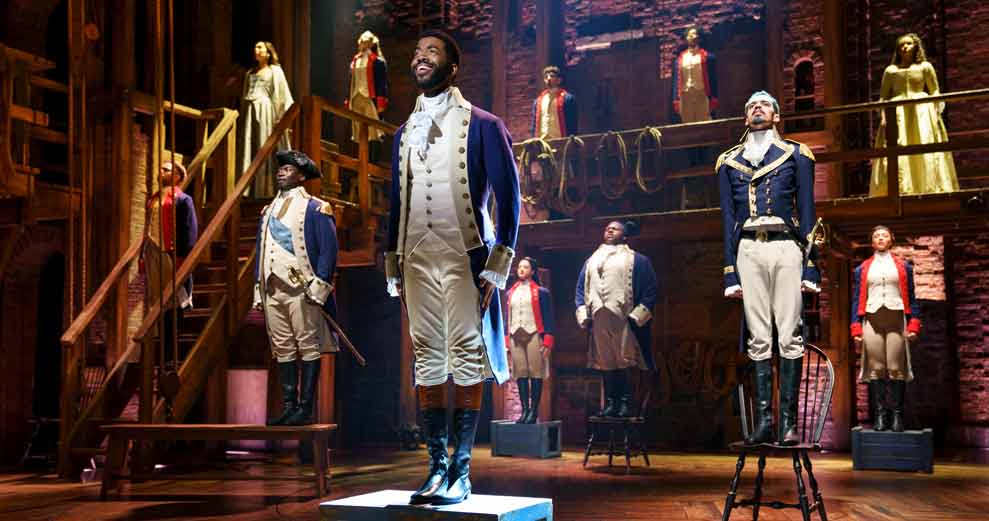 A Chat with the San Francisco Cast of ‘Hamilton’

Ever wondered what it’s like to be in a hit Broadway show? Teach & Travel sat down with some cast members from the San Francisco company of Hamilton to learn their favorite parts of the show, what it’s like to work with Lin-Manuel Miranda, their reactions when they found out they were cast in the show, and more. 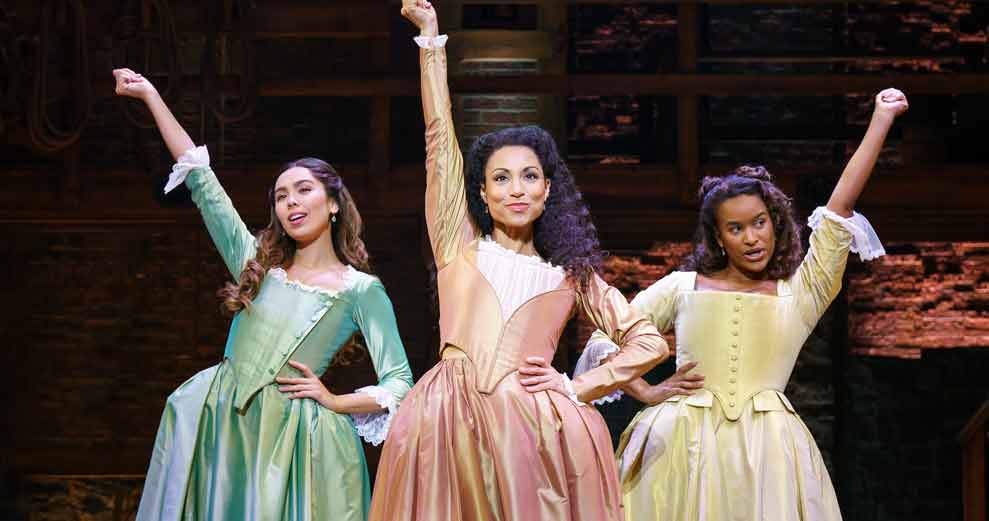 What was it like performing with Lin in Puerto Rico?
Performing in Puerto Rico with Lin was like nothing I’ve ever experienced. Doing In the Heights with him in LA when he came to do a special limited engagement there was amazing. But even that did not compare to the electricity, enthusiasm and emotion of bringing Hamilton to the island of Puerto Rico. Performing for an audience of insanely proud and grateful fans was like a homecoming for Lin—and for the show—and I’ll never forget the roar and shrieks of that crowd when he stepped on stage each night.

The opportunity to play with the genius that is Lin-Manuel and experience him inhabiting the role of Hamilton like no one else can was incredible. It was like a master class every show. Of course, there was pressure to live up to every word he wrote for each of our characters. But there was also an ease to doing the piece with the visionary who poured his heart and soul into creating it. We felt safe—we knew he would carry us all to the places we needed to be throughout the story.

It was also extraordinary to be able to spend time with people from the island and witness the joy, generosity and love they radiate, even after having faced devastating loss. It was lovely to be a part of bringing some hope and healing to this community who felt their suffering had been neglected by many. I think we all feel the people of Puerto Rico lifted us up in a way we could never begin to reciprocate.

Tour life is demanding but also rewarding, seeing as you get to see and explore new areas. What are some of your favorite things to do in San Francisco?
I love visiting the various parks and museums here in San Francisco. I have two kids, so those are always the first stops for us in a new city. We’ve nailed down our favorites—Dolores Park, Raymond Kimball Park, Duboce Park, Golden Gate Park—but there are still so many more parks to see. The Bay Area Discovery Museum in Sausalito is also a gem. I love wandering down Valencia when I’m kid-free, poking into boutiques and coffee shops and restaurants. This city is a foodie and shopping danger zone. Oh! Also, Fillmore: All of my favorite clothing stores on one street?! Amazing.

How would you describe the experience audiences get when seeing Hamilton live in San Francisco?
Whether it’s your first time coming with knowledge of the music and libretto, or you know nothing and are walking in blind, seeing this show will change your life. The talent of this cast, musicians and crew is unmatched. The storytelling is profound. You’ll laugh. You’ll cry. You’ll leave singing the songs and debating with your friends or family which was your favorite and discussing the lives of these now-legendary historical figures and asking what you would have done if you were one of them.

What was your reaction when you found out you’d been cast in the show?
I was thrilled. I was grateful. I was ready for it. I got official word coming back from the final audition while I was on the subway train and it was just the perfect timing and perfect New York actor moment. Grinning and boiling with excitement on public transit where I have spent so many days working toward and in this business … It was a fitting scene. 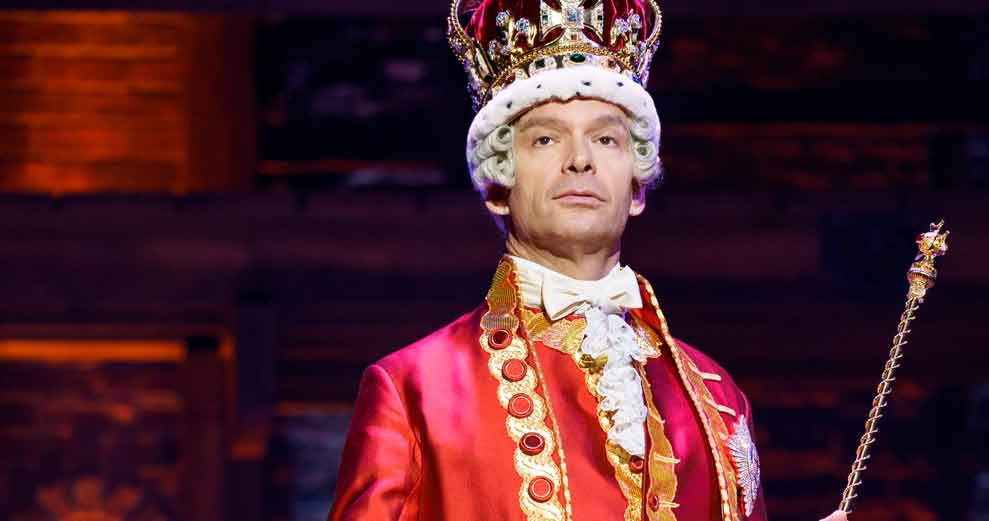 Since Lin and I are “Hometown” boys, the warmth and love from our fellow Puerto Ricans was amazing. Lin needed full-time security. I was stopped on the streets for selfies and autographs. We were all over the press and the entire island was buzzing with Hamilton fever. It was fantastic to be back home and was surreal walking the streets where I was raised, seeing old theater friends and connecting with the schools where I started my theater life. Lin would stop the show for several minutes when he walked on stage and the audiences would lose their minds when I walked on stage in my full King regalia. It’s a memory that will be with me forever … One of those life-altering and unforgettable times in my life.

Tour life is demanding but also rewarding, seeing as you get to see and explore new areas. What are some of your favorite things to do in San Francisco?
San Francisco is an extremely picturesque city—beautiful architecture, gorgeous ocean and bay views, bridges, beaches and magical redwood forests, only a short drive from downtown. I’m an outdoorsman, so I enjoy hiking in the woods and on the cliffs overlooking the ocean in the Marin Headlands and Fort Funston. For short in-town hikes, I go to Mount Sutro and Golden Gate Park. I also love the Presidio for amazing hikes and ocean views with the Golden Gate Bridge as a background. My next favorite thing is eating, and San Francisco does not disappoint when it comes to amazing food.

How would you describe the experience audiences get when seeing Hamilton live in San Francisco?
This show is a phenomenon. Audiences are not only excited to see the show, but they know the music inside and out and many people come to see the show multiple times. The demographics are across the board—from young to old and everyone in between. My favorite thing about our production in San Francisco is that this particular cast is insanely talented. Hand-picked by the creative team to play Puerto Rico with Lin, this cast exceeds all expectations and takes Hamilton to another level. Add the legendary and iconic Orpheum Theater and I know that audiences are in for an unforgettable theatrical experience.

What was your reaction when you found out you’d been cast in the show?
I was on the Universal Pictures Lot in Los Angeles supervising an event for a local catering company (one of my many survival jobs) and I literally almost started to cry. Not only was I playing King George III in Hamilton, but I was going home to Puerto Rico with Lin—a dream come true for a veteran performer with 48 years of experience on the boards. 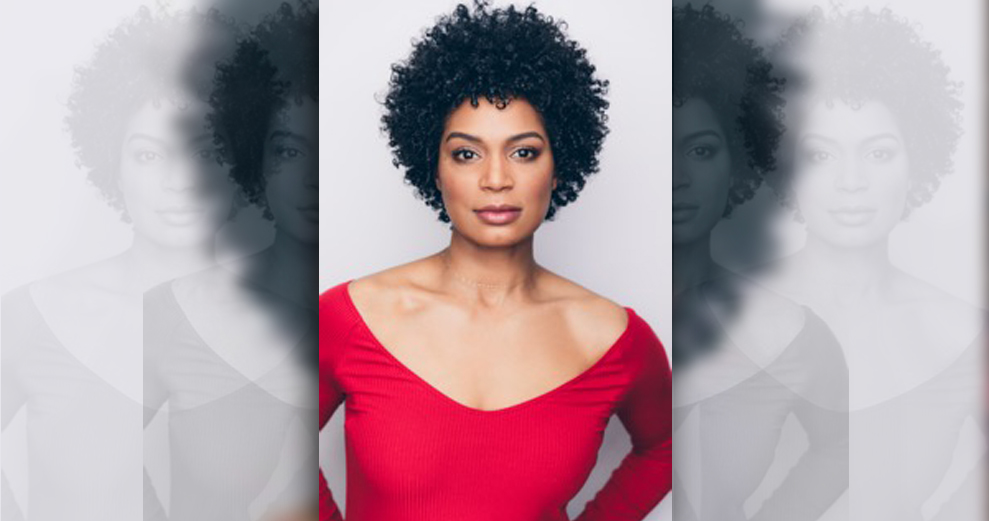 What was it like performing with Lin in Puerto Rico?
I had the pleasure of first performing with Lin in 2010. We were in Merrily We Roll Along at City Center in New York City (this was post-In the Heights and pre-Hamilton). Lin is such a brilliant artist and performer. He is incredibly generous, present and his mind works faster than anyone I know! Watching him perform the piece he created and penned was a privilege and being able to perform with him in Puerto Rico is something I’ll never forget.

Tour life is demanding but also rewarding, seeing as you get to see and explore new areas. What are some of your favorite things to do in San Francisco?
Tour is a wonderful opportunity to get a taste of what it’s like to live in another city. Getting the chance to explore San Francisco and take in the beauty of the outer areas has definitely been a treat. Golden Gate Park, Land’s End Trail, Saulsilito and Sonoma have been some favorites. I’m very excited to travel to Big Sur next month!

How would you describe the experience audiences get when seeing Hamilton live in San Francisco?
When I first saw Hamilton, I was blown away. Not only was I seeing a revolutionary feat in storytelling, but I was seeing it told by people who represented me and the America we now know. I hope audiences are able to absorb the poignancy of the music and choreography. Yes, it’s our history, but it’s also a beautiful display of humanity, complexity and a celebration of diversity that will help us move past our complicated history.

What was your reaction when you found out you’d been cast in the show?
I was in an Uber on the FDR on my way home when I got the call. I’m sure I alarmed my driver with screaming and tears. I wanted to be in Hamilton from the moment I saw it. It is literally a dream come true.