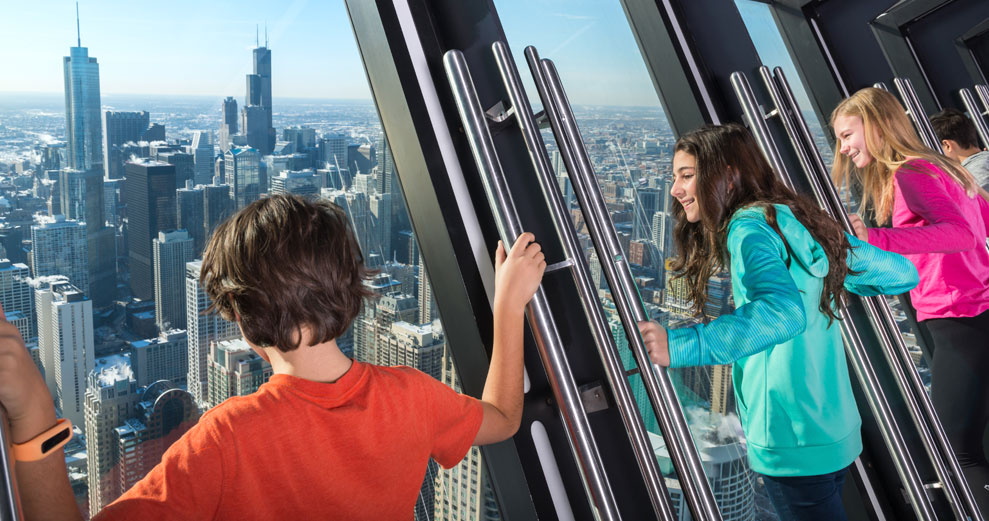 Discover nine distinct and exciting neighborhoods through the Chicago History Exhibit. Filled with unique multimedia, students can engage with the city’s bustling history and dynamic culture as they make their way toward one of the fastest elevator rides in North America. Each neighborhood is highlighted by an exclusive video tour, taking guests into the city streets to see the Chicago of today, as hosted by narrators from the famous Second City improv theater.

360 CHICAGO is also the home of TILT—Chicago’s highest thrill ride, which tilts guests over the city 1,000 feet above Michigan Avenue. A thrill for both the adventuresome and the inquisitive, TILT offers its own unique exhibit exploring its construction. Two large-scale panels describe and display the physics, weight and operation of this one-of-a-kind marvel.

360 CHICAGO is offering a special promotion for student groups through 2018. Groups that book their tour of this iconic observation deck for a Monday, Tuesday, Wednesay or Thursday by March 30, 2018, will TILT free during all of 2017 and 2018 (excluding June 1 thorugh August 31)!

At 360 CHICAGO observation deck, there is always plenty to see— and this year, there is even more to learn.

Courtesy of 360 Chicago. For more information on booking your student groups, visit 360chicago.com/groups.