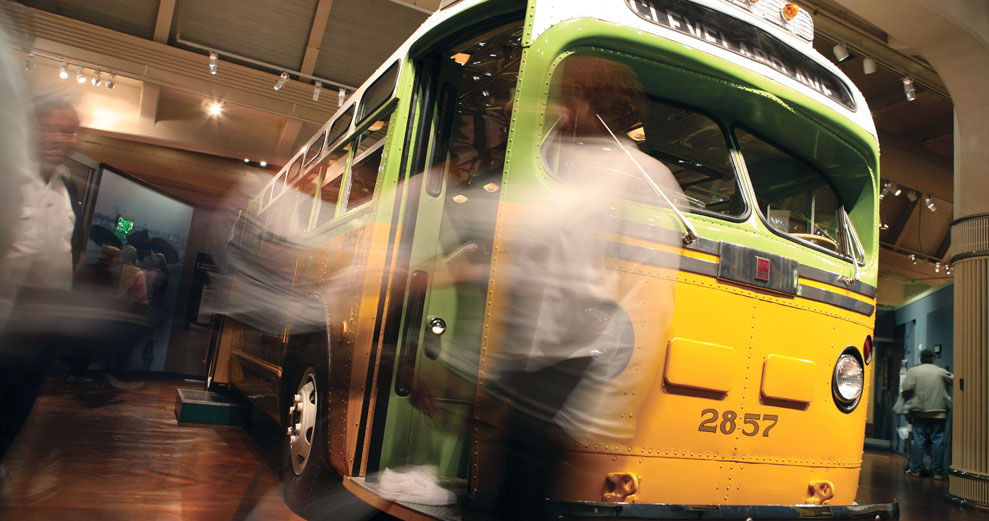 The legacy of African-Americans in United States history and culture is widespread. While destinations and institutions across the country preserve and honor achievements of African-Americans year-round, Black History Month often offers opportunities for students to engage in special programs and exhibitions.

These five cities are home to significant moments in African-American history, where student travelers can trace the footsteps of pivotal leaders who rewrote the U.S. story and influenced a rich culture.

In the early 1960s, Georgia’s capital became the hub for the civil rights movement. Today, the city preserves the civil rights legacy through historic sites and landmarks, museums, influential African-American churches, historically black colleges and universities, and annual events during Black History Month that commemorate the achievements of African-Americans throughout history.

The Martin Luther King Jr. National Historic Site in the Sweet Auburn district—the birthplace of Dr. King—allows travelers to tour his birth home and other notable sites, such as the Ebenezer Baptist Church and his gravesite, while exploring his extensive legacy.

King’s dream is still a work in progress, and the Center for Civil and Human Rights connects the civil rights movement to today’s global human rights movement through interactive, high-tech galleries.

Boston was one of the earliest abolitionist cities, and prominent leaders such as Frederick Douglass, W.E.B. Du Bois, Martin Luther King Jr. and Malcolm X have all left their mark.

The 1.6-mile Black Heritage Trail encompasses the largest collection of historic sites in the country relating to the life of Beacon Hill’s free African-American community prior to the Civil War—of which the African Meeting House was once the heart. The oldest black church building still standing in the United States, the African Meeting House was host to giants in the Abolitionist Movement including Douglass, who delivered an 1860 anti-slavery speech in the house.

The Black Heritage Trail begins at the Museum of African-American History and highlights 14 sites around Beacon Hill. Boston is also an excellent destination to learn the role black Americans played in the American Revolution on the city’s Freedom Trail.

Detroit played a major role in the Underground Railroad: The city was the site of the famous meeting between abolitionists Frederick Douglass and John Brown. From the anti-slavery movement of the 1800s to the civil rights unrest of the 1960s and the development of new musical genres, Detroit’s African-American heritage is full of significant and influential people and places.

The self-guided African-American Heritage walking tour highlights attractions including the First Congregational Church of Detroit, which served as the last stop on the Underground Railroad before fugitive slaves crossed the river to Canada and freedom; the Detroit Institute of Arts, which includes an extensive collection of African-American art; and the Motown Historical Museum, the site where Motown greats recorded hits.

The Slave Haven Underground Railroad Museum offers an in-depth look at slavery through tours of the historic Burkle Estate, one of the stops that offered refuge for runaway slaves on their way to freedom. The Cotton Museum at the Memphis Cotton Exchange also explores slavery and its role in the South’s cotton economy.

Experiencing black history in Memphis is not complete without celebrating musical greats and chart-topping hits that changed the course of music forever. Sun Studio, the Blues Hall of Fame, the Stax Museum of American Soul Music, Memphis Rock ‘n’ Soul Museum and W.C. Handy Home and Museum laud black musicians across a range of genres.

Under French rule of colonial Louisiana in 1724, the Code Noir (Black Code) was created to restrict the rights of the slaves forcibly brought over from Africa. The population of enslaved Africans somehow managed to preserve their heritage in the New World throughout the decades.

A vital place in the development of the culture was Congo Square, now part of Armstrong Park on the edge of the French Quarter in historic Tremé. Under Spanish control in the late 18th century, slaves were afforded the simplest human rights including time off from work on Sundays—which resulted in hundreds of African slaves and laborers congregating to trade and sell goods, play music, dance and socialize.

Today, Armstrong Park boasts an art-filled tribute to Congo Square, complete with Sunday festivities. The African American Museum and Backstreet Cultural Museum, both in Tremé, are also excellent locations to learn about the heritage of African-American New Orleanians.