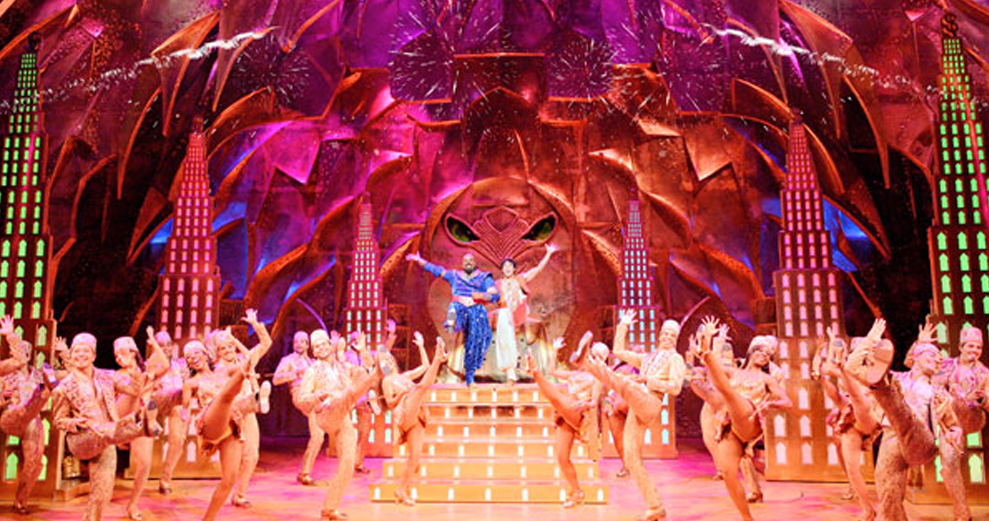 A Director with the Genie Touch

For 12 years, Casey Nicholaw, ALADDIN director, sang and danced in multiple Broadway show choruses. Then, while performing in the Dr. Seuss musical Seussical, he had an epiphany. “I was in a cage on stage in a purple yarn suit singing backup—and I was like, ‘I need a little more!'”

Nicholaw decided to try his hand at choreography, hosting a showcase attended by some of Broadway’s top theater professionals. Among them was legendary director Mike Nichols, who hired Nicholaw to choreograph Spamalot. An instant success, the show went on to win the 2005 Tony Award® for Best Musical. Nicholaw continued his winning streak with the raucous hit The Drowsy Chaperone and the global smash The Book of Mormon, for which he won a Tony Award® for Best Direction of a Musical. In just a few years, Nicholaw had taken over a brand-new role: Broadway’s go-to director and choreographer for new musical comedies.

When the folks at Disney were on the lookout for someone to direct their stage version of ALADDIN, Nicholaw was a wish come true. “He’s really the Gower Champion of our time—a guy who looks at a show for its entertainment value, who thinks, ‘How much fun is it going to be?'” said Thomas Schumacher, the show’s producer and president of Disney Theatrical Group.

It was a dream job, albeit one that came with its own unique challenges. “The tone of the movie was really action-adventure, and on stage you can’t do most of that,” Nicholaw said. “You have to give it a different take and make it theatrical in a way that we haven’t seen on film.”

And how does ALADDIN become more theatrical? For the stage version of “Friend Like Me,” the Genie’s showstopper in act one, Nicholaw returned to the song’s roots as a Cab Calloway-style big band number.

“It originally had much more of a vaudeville, musical theater feel to it. So, we’ve added that back in.” Nicholaw also threw in a nod to Dancing with the Stars and some country-western, for fun. “It takes a lot to choreograph a number that also gets laughs.”

ALADDIN is a funny show, but it’s also sophisticated. “I think it’s going to be so much fun for people who’ve seen the movie to see it now on stage. Now, it’s a bit more adult. It’s still true to the movie, but it’s done in high musical theater style.”

Audiences and critics were quick to fall in love with the show, which opened to rave reviews and became the undisputed top-selling new musical of the season. Despite the show’s success, Nicholaw doesn’t take all the credit. “I’ve never seen a group of people work so hard at getting something right. It’s like doing theater for all the reasons that you love. That’s what I want to see as a director.”

The hard work has unquestionably paid off.

“It’s been such a journey. We always knew it would be good, but we had no idea it would be this good. It makes me so proud.

“All I want ALADDIN to do is to bring joy into people’s lives. We could all use it.”