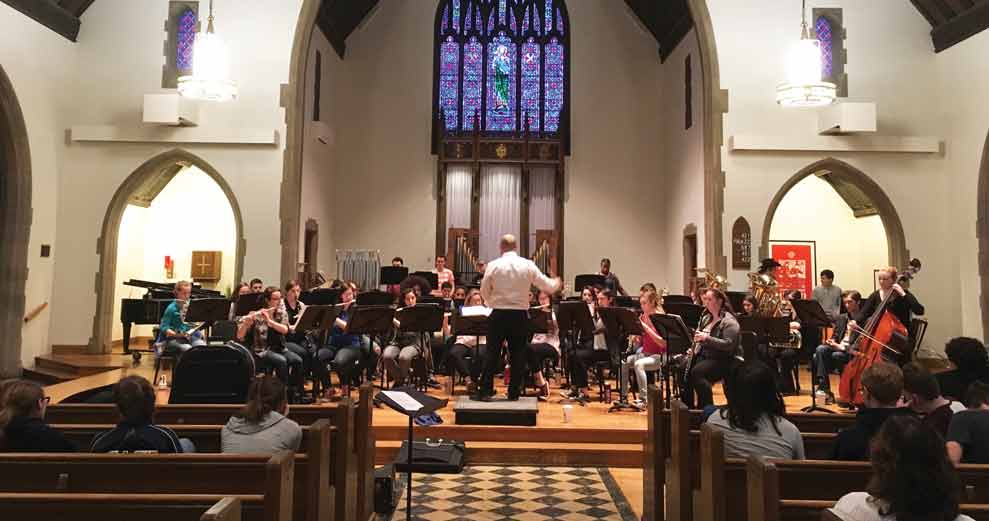 After 25 years of teaching, I have taken my band students on trips almost every year to places like New York City, Disney World and more. Each trip takes tons of work for preparation and fundraising. At times, I’m sure a lot of us share the feeling that we are more like accountants, travel agents, trinket and candy vendors than actual teachers. However, we must enjoy it to some degree or we wouldn’t be doing it … Right?

Here’s an idea that may change the game for any of us struggling for the next big adventure!

One of the allures to student travel is distance, yet familiarity. It has to be someplace students have heard of and can generate a buzz among friends to get everyone on board. So, I felt the only way to pitch the idea of a local trip was to make it a “Mystery Tour” and not tell them where we were going.

Entering the 2016 – 2017 school year, we welcomed a new orchestra teacher, Laura Jay. I discussed my Mystery Tour idea with her, and we put together a two-day itinerary.

Our goal: Introduce our students to new cultures, history, architecture and a college experience—all for under $200 per student.

Early in October, we introduced the Mystery Tour idea to the band and orchestra students. We gave them an intent-to-travel form, which asked for a $50 deposit on a trip that would take place during April break, starting at 8 a.m. and ending at 10 the next night. Total cost would be less than $200 and include all meals, lodging, admissions and transportation.

Some kids said they wouldn’t sign up unless they knew where they were going. We told them we would only tell parents if they wanted to know—but they had to swear to secrecy.

The kids could not know our plans.

After we had the majority of the trip planned, I enlisted the help of a dedicated tour operator to finalize the itinerary, payments and logistics for us. This took a chunk of work off our plates. Use of a professional tour company helped us anticipate potential problems, covered us with insurance, and gave us one point of contact.

For the trip, Mrs. Jay put together a game for the students on the bus. They had to guess where each destination was, after she gave some clues. She brought some prizes—which made it really fun for the kids.

The bottom line? It was fun, educational, musical, affordable—and it gave our students a unique view of their own backyard.

The final cost for the mystery tour was about $175 per person.

The experience was priceless.

Phil Aguglia has been traveling with his band programs for 25 years. A sought-after conductor and clinician, he’s the recipient of nearly a dozen awards for excellence and innovation in music education, including recognition from the Grammy Foundation as a semifinalist music for its music educator award. Aguglia teaches 8th- through 12th-grade bands at Kenmore East High School in Tonawanda, New York, is the owner and craftsman of PaGu Batons, and is board chair of Music is Art.