Member Login
Leaderboard
SYTA»Articles»All It’s Quacked Up to Be: The Peabody Memphis Duckmaster
Share This 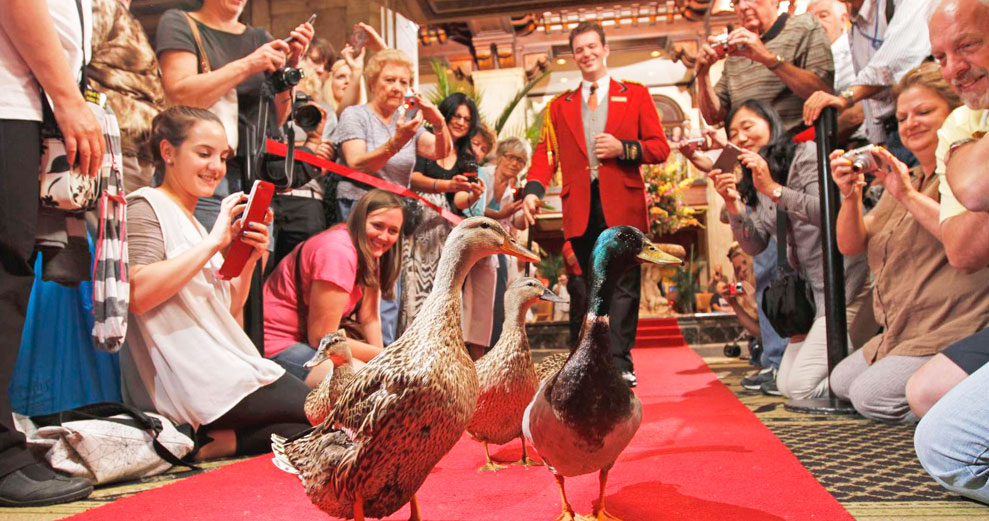 All It’s Quacked Up to Be: The Peabody Memphis Duckmaster

Every day at 11 a.m., Anthony Petrina marches ducks down a red carpet and into a fountain.

“I’m not going to lie,” he said. “My job is very strange. I train ducks for a living. I did not intend to do this, but I lucked into it.”

Petrina is the fifth Duckmaster in the history of The Peabody Memphis, a hotel famous for its tradition of rolling out the red carpet for its resident ducks’ daily waddle to the lobby fountain.

The Peabody Marching Ducks have appeared on The Tonight Show with Johnny Carson and The Oprah Winfrey Show and have been a question on the TV game show Jeopardy!

The ducks and the ritual, however, would be nothing without the Duckmaster.

Petrina offers an inside look at what it takes to keep the legendary tradition of The Peabody Marching Ducks afloat.

Could you share the tradition of the Peabody Ducks?

Back in 1933, our general manager, Mr. Frank Schutt, and his friend Chip Barwick were duck hunting in Arkansas. They acquired a bottle of Jack Daniel’s, which, at the time, was Prohibition-era whiskey. So, they hang out in the backwoods of Arkansas for a little while, sipping on the whiskey. Don’t do any actual hunting.

They get home to the hotel quite late at night. The general manager and his friend had forgotten to leave the live duck decoys—which were legal at the time—back at the friend’s farm in Arkansas. So, they snuck the live decoys back into the hotel and let them loose in the big beautiful fountain.

When they come down the next morning, the ducks had behaved. They stayed in the fountain. Guests had gathered around and were staring at the ducks.

The general manager rushes over and starts apologizing, but people are laughing him off, saying, “We love the ducks. Look at them swimming around. Leave them be.”

Guests started to suggest we let the ducks stay, and we have.

How did the Peabody Memphis come to employ a Duckmaster?

In 1940, we hired a bellman: Mr. Edward Pembroke. He turned out to be a bit of a runaway. When he was 9 years old, he ran away from home and joined the Ringling Brothers and Barnum & Bailey’s Circus, traveled around the country for a long time, and eventually settled in Memphis and got a job as a bellman.

Over the years, we had just kind of brought the ducks down into the lobby and they would swim around the fountain at the guests’ requests. In the afternoon, it was the bellman’s job to chase the ducks around and put them back in the carrier—basically get them back upstairs as best as you can.

Having worked at the circus with the animals, Pembroke knew he could do better. He was over chasing ducks around the fountain. So, he offered to train the ducks to march themselves into the elevator and down a red carpet—because, of course, he’s a showman; he knows how to put on a presentation.

He ends up doing this job for 50 years.

How did you become the Duckmaster?

I started here about seven years ago. I was waiting tables in the restaurant. I have a degree in Hotel and Resort Management from the University of Memphis. Some of the executive committee here at the hotel went and taught my introductory class, and I fell in love with this place professionally. I fell in love with the idea of working here. I got my foot in the door waiting tables. I moved up to supervisor, and that was great, but then we needed a new Duckmaster.

Then, quite by surprise, we needed a new full-time Duckmaster.

I was persistent about getting the job.

Here I am, about six years later.

What does your job as Duckmaster entail?

You get to hang out with the ducks all day, wear the red coat, give the presentation in the lobby, but it’s not just that. It’s everything. I’m in charge of everything for the ducks, from their diet, to their home, their morning wake-up, their training.

Tell us about the ducks.

Every three months, we get a brand new team of ducks. A Memphis-area family has been raising our ducks for us since 1981. They raise them as wild ducks. While the ducks are being raised on the farm, they keep an eye on them. They’ll pick out a group and send a team. If those ducks do well and get along, they become the new team.

Once the newbies are trained up and have taken over, the veteran ducks go back to the family.

The ducks stay here for just three months. I treat them as the family who raises them does. I don’t pick them up or pet them; I don’t feed them out of my hand or give them rewards for doing a good job. As much as I’d like to, I don’t get too personal with them. They have to go back out into the wild.

How do you train ducks to march to a fountain every day?

Since they’re wild, we take advantage of their natural inclination to—no offense to any of the guests—leave us alone. I walk behind them. I have a cane so I can kind of herd them across the rooftop of the Duck Palace to the elevators and back and forth.

I know they’ll walk away from people and avoid us, so I line the red carpet with guests, so there’s a nice, clear, straight open path they don’t want to deviate from.

Once they get to the fountain … Well, it’s like a duck to water. They want to stay there with the other ducks.

Where are the ducks when they’re not at the fountain?

The Duck Palace is up on the roof of the hotel. People are absolutely welcome to come up and see it—we’ve made a pretty nice home for them. It’s got granite lining, all throughout; a custom bronze duck fountain for them to swim in; a front lawn; a sundeck; and butler service. That’s me. It’s my job to make sure they live well and have a good time.

What is your favorite part of being Duckmaster?

The ducks are great, but I like the people. I tell folks all the time that it doesn’t matter who you are, where you’re from, what you do … You kind of want to come see ducks waddle on a red carpet. I’ve seen the same smile from kids that I’ll see on Fortune 500 CEOs or big celebrities. It’s a great equalizer, as far as a cool tradition and something to see.

Over the years, we’ve had everyone from Kid President to Ariana Grande. I once got dropped in on by President Jimmy Carter and First Lady Rose. They shook my hand at the end, and I took the ducks back upstairs, and that was a Tuesday.

Photo courtesy of The Peabody Memphis.