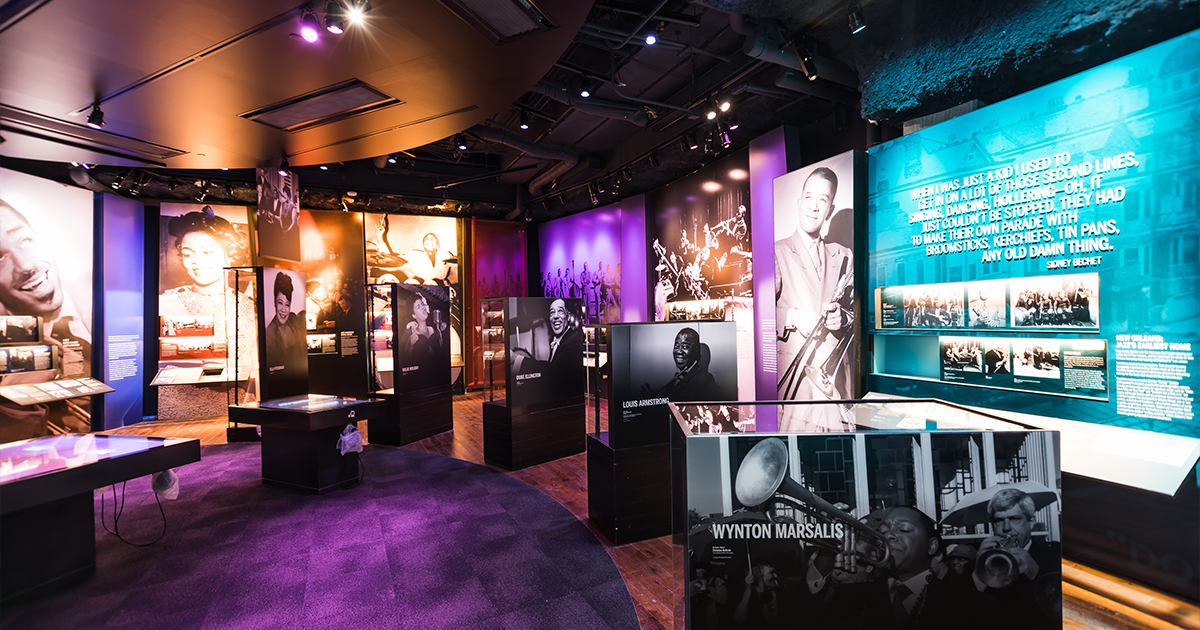 It’s always a good time to learn about and celebrate Black history.

While Black History Month is a great time to shine a special spotlight on this aspect of America, museums across the nation delve year-round into different aspects of African American and Black history and culture over the centuries. From slavery to the Civil Rights Movement to modern day, there’s a wealth of things to learn and see, including master musicians, inspiring artists, sport pioneers and more.

When you’re planning your next student trip, don’t leave any blind spots — it would be great to include a Black history museum in your itinerary. Here are a few recommendations:

Established in 1991, the National Civil Rights Museum is located at the former Lorraine Motel, where civil rights leader Dr. Martin Luther King Jr. was assassinated on April 4, 1968. Through interactive exhibits, historic collections, dynamic speakers and special events, the museum offers visitors a chance to walk through history and learn more about a tumultuous and inspiring period of change.

To accommodate public demand for further educational opportunities, the museum underwent a $27.5 million renovation in 2013 and 2014, adding more than 40 new films, oral histories and interactive media to the already robust galleries.

The Legacy Museum: From Enslavement to Mass Incarceration / The National Memorial for Peace and Justice
Montgomery, Alabama
museumandmemorial.eji.org

Don’t let the long names confuse you: The Legacy Museum and Memorial for Peace and Justice are two important sites for Black history in Montgomery. The Legacy Museum is situated on a site in Montgomery where Black people were forced to labor in bondage. Blocks from one of the most prominent slave auction spaces in America, the Legacy Museum is steps away from the rail station where tens of thousands of Black people were trafficked during the 19th century. This museum provides a comprehensive history of the United States with a focus on the legacy of slavery.

The recently opened NMAAM is the only museum dedicated to preserving and celebrating the many music genres created, influenced, and inspired by African Americans — including spirituals, blues, jazz, gospel, R&B, and hip hop. The museum’s expertly curated collections of artifacts, memorabilia and clothing share the story of the American soundtrack by integrating history and interactive technology to bring the musical heroes of the past into the present.

The National Voting Rights Museum & Institute offers America and the world the opportunity to learn the lessons of the past to assure we will not make the same mistakes in the 21st century and beyond. It is a place where past and present struggles and future possibilities can be studied, felt, and remembered. The NVRMI exhibits materials and artifacts from the voting rights struggle in America, especially those that highlight the experiences, which fueled “Bloody Sunday”, the Selma to Montgomery March, and the Civil Rights Movement throughout the South.

Through permanent and traveling exhibits, the National Underground Railroad Freedom Center shares the stories of freedom’s heroes, from the era of the Underground Railroad to contemporary times, challenging and inspiring us all. Since opening in 2004, they have filled a void in our nation’s cultural heritage. Rooted in the stories of the Underground Railroad, the center attempts to “illuminate the true meaning of inclusive freedom by presenting permanent and special exhibits that inspire, public programming that provoke dialogue and action, and educational resources that equip modern abolitionists.”

The National Museum of African American History and Culture is the only national museum devoted exclusively to the documentation of African American life, history, and culture. It was established by Act of Congress in 2003, following decades of efforts to promote and highlight the contributions of African Americans. To date, the museum has collected more than 36,000 artifacts! It’s a fun, informative, massive museum with tons of resources for educators.

Founded in 1976 in celebration of the nation’s Bicentennial, the African American Museum in Philadelphia (AAMP) is the first institution funded and built by a major municipality to preserve, interpret and exhibit the heritage of African Americans. Throughout its evolution, the museum has objectively interpreted and presented the achievements and aspirations of African Americans from pre-colonial times to the current day.

Visit for powerful exhibitions in-person or check out incredible online exhibitions like Rendering Justice, which showcases an expansive examination of mass incarceration and an unflinching depiction of contemporary America. Or talk with your students about Through His Eyes: Youth Activism in The Civil Rights Era In Philadelphia.

For over half a century, the Charles H. Wright Museum of African American History has dedicated itself to exploring and celebrating the rich cultural legacy of African Americans.
Through dozens of permanent and visiting exhibitions, over 300 annual public events and programs, as well as education and research opportunities for adults, children, and visiting scholars, The Wright inspires visitors toward greater understanding, acceptance, and unity by reflecting on the triumphs and tragedies of African-American history.

Home to the Blanche Coggin Underground Railroad Collection, the Harriet Tubman Museum Collection, and the Sheffield Collection—a repository of documents regarding the labor movement in Detroit—among many other notable materials, The Wright houses more than 35,000 artifacts pertaining to the African American experience.