Member Login
Leaderboard
SYTA»Articles»For the Love of Sports: Halls of Fame and Museums
Share This 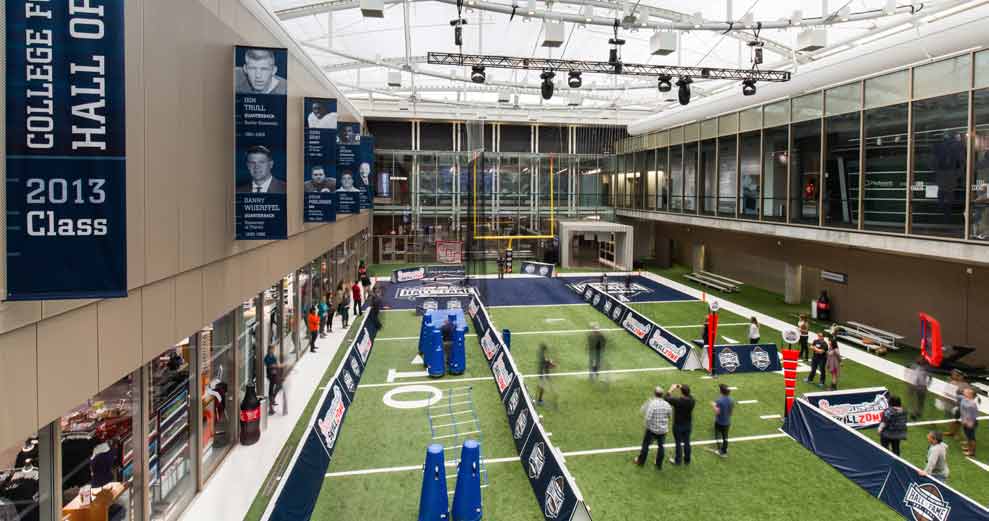 For the Love of Sports: Halls of Fame and Museums

College Football Hall of Fame and Chick-fil-A Fan Experience | Atlanta, Georgia
Find more than 50 state-of-the-art experiences and exhibits in this 94,256-square foot facility, featuring a 45-yard indoor football field where students can give field goal kicking a try. View the Helmet Wall displaying the helmets of close to 800 college teams, take part in Fight Song Karaoke, or enjoy the sights and sounds in the Game Day Theater. There’s plenty to see and do in this downtown Atlanta attraction.

Hockey Hall of Fame | Toronto, Ontario, Canada
Do it all … at The Hall! Toronto’s premier hockey attraction is home of the Stanley Cup and the best of hockey. Go one-on-one against life-size animated versions of today’s greatest goalies and shooters, call the play-by-play of some of hockey’s greatest goals, view hockey flicks in the venues two theaters, get up close and personal with the Stanley Cup, and explore the world’s largest collection of hockey memorabilia.

International Tennis Hall of Fame | Newport, Rhode Island
Nearly 2,000 objects displayed from a collection of more than 25,000 artifacts showcase tennis’ long, rich history. Learn how today’s game evolved from court tennis—first played in medieval monasteries—and see how equipment and attire have changed over the years. Memorabilia, photographs, trophies and videos are a sampling of what enthusiasts will see here.

Mississippi Sports Hall of Fame | Jackson, Mississippi
This venue tells the stories of more than 300 athletes and coaches from Mississippi who excelled in sports and had an impact on the state. “Many people don’t realize the rich sports history the Magnolia state has to boast about. Did you know that Brett Favre, Jerry Rice, Walter Payton and Archie Manning all hail from Mississippi? And that’s just one sport!” offers Andrea Patterson, the hall’s marketing director.

Naismith Memorial Basketball Hall of Fame | Springfield, Massachusetts
Enjoy more than 40,000 square feet of basketball history, including the stories of nearly 300 inductees. Hundreds of interactive exhibits share the history of basketball, and visitors can shoot baskets on a full-size, regulation basketball court. Skills challenges, live clinics and shooting contests are among the many things in which students might participate.

NASCAR Hall of Fame | Charlotte, North Carolina
Try your hand at driving in realistic racing simulators, take the pit crew challenge, or simply take in 150,000-square feet of artifacts and interactive exhibits. “Whether students are only in town for one day or spending the entire weekend, the NASCAR Hall of Fame offers a deep dive into the history of stock car racing that excites both the avid fan, and those new to the sport of NASCAR,” said Laura Hill White, director of communications, Charlotte Regional Visitors Authority.

National Baseball Hall of Fame and Museum | Cooperstown, New York
Baseball sights, sounds and images come alive in this hall of fame, first dedicated in 1939. Through video, audio recordings, thousands of artifacts and many hands-on exhibits, baseball history is on full display and offers a look at the game, from the beginning to the present. Main exhibits include closer looks at Babe Ruth, Hank Aaron, women in baseball, African-Americans in baseball, baseball in Caribbean Basin countries and more.

Pro Football Hall of Fame | Canton, Ohio
The history of America’s most popular sport is chronicled and highlighted through interactive displays and hands-on exhibits. Enjoy an immersive holographic theater, memorabilia and mementos from recent NFL seasons, and a gallery devoted to sharing the history of the Super Bowl. “The Pro Football Hall of Fame can specially tailor visits for groups,” said Pete Fierle, chief of staff and vice president of communications. “Aside from discounted group rates, the Hall of Fame also offers an array of options to make experiences special for student groups.”

Women’s Basketball Hall of Fame | Knoxville, Tennessee
Opened in June 1999 and preserving the history of the game, this is the only facility of its kind dedicated to all levels of women’s basketball. With the 2018 Induction, the Women’s Basketball Hall of Fame celebrates its 20th anniversary and adds seven new members to its prestigious hall, honoring 164 inductees. Don’t miss the world’s largest basketball, testing your court skills, or learning about the All American Red Heads.

Photo courtesy of the College Football Hall of Fame.