Member Login
Leaderboard
SYTA»Articles»Go Above and Beyond at the National Air and Space Museum’s Steven F. Udvar-Hazy Center
Share This 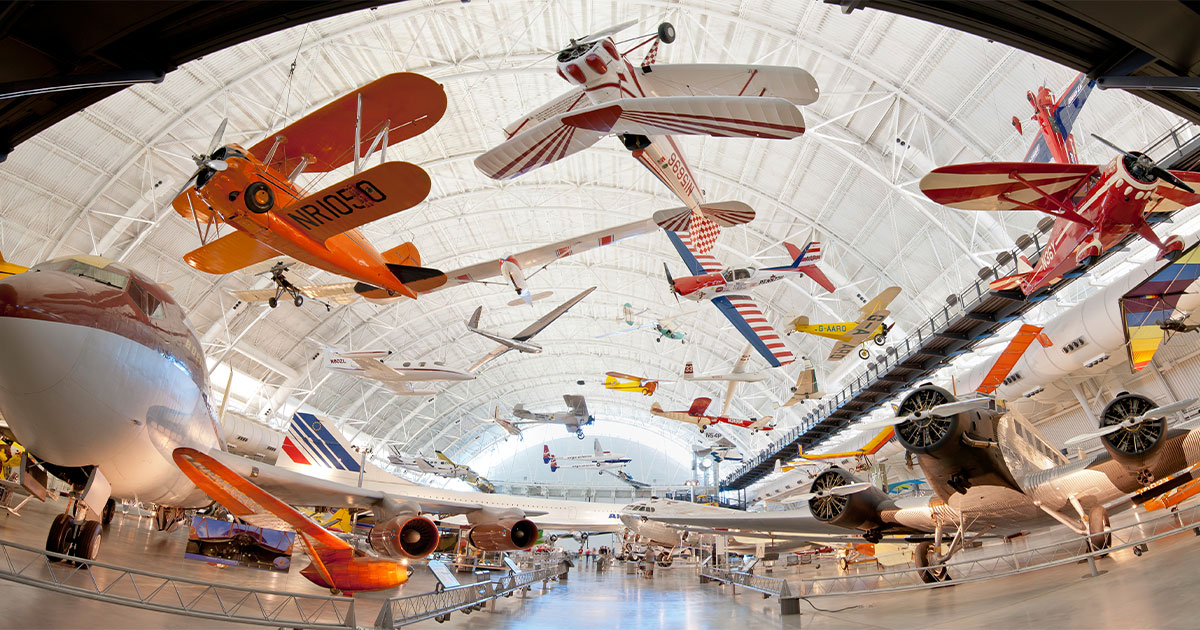 Go Above and Beyond at the National Air and Space Museum’s Steven F. Udvar-Hazy Center

The National Air and Space Museum’s second site may technically be in Chantilly, Virginia, but it’s something that the entire northern Virginia region claims as their own. The hangar-inspired architecture makes it perfect for its location at the end of Dulles Airport’s runways. It even has a tower with a live air-traffic control feed for watching airplanes take off from and land at the airport.

The first artifacts that you’ll see on display are a set of six small model airplanes that businessman Steven F. Udvar-Hazy made as a young boy in Hungary in the 1950s. Modeling kits weren’t available to him, so he crafted his models from everyday items, like paper, chewing gum, and nail polish. Udvar–Hazy’s  lifelong fascination with flight led to a successful career that allowed him to make a contribution that made the Udvar-Hazy Center a reality.

Continue walking and you will reach an overlook that shows the Boeing Aviation Hangar. The 300-yard hangar holds nearly 200 aircraft. It also has models, uniforms, engines, and memorabilia, all displayed in a “natural aviation environment.”

The oldest successfully flown aircraft at the Center is the VanDersarl Bleriot, built by two teenage brothers from Fort Collins, Colorado. They built the entire plane, including the engine, from scratch starting in 1909, and by 1911 they flew it successfully – with no prior flight instruction.

Many of the airplanes on display, like the Bleriot, are one-of-a-kind. Others are the first- or last-of-their-kind, or have a special significance that make them stand out in aviation history.

Piloted by Chuck Yeager on October 14, 1947, the Bell X-1 Glamorous Glennis was the first airplane to fly faster than the speed of sound. This aircraft is temporarily on display at the Udvar-Hazy Center for the next year—and is parked near other supersonic greats, including the SR-71 Blackbird that set the still-held world speed record when it flew from California to Dulles Airport in one hour, four minutes and 20 seconds.

Continue walking past the Bell X-1 and you’ll enter the Museum’s James S. McDonnell Space Hangar.  The centerpiece artifact is Space Shuttle Discovery. This orbiter flew almost 150 million miles over 39 missions, more than any other shuttle in the fleet. The largest artifact in the Hangar, Discovery is surrounded by spacecraft and artifacts from the dawn of the space age to the 21st century.

The Museum’s size (340,000 square feet of exhibit space) and its free educational offerings make it a fantastic stop for school groups.  Every one of the 3,000+ artifacts on display has a story, and the Museum’s volunteer docents love sharing some of them with visitors. Be sure to ask them about their own backgrounds.

Students can also enjoy an interactive, hands-on learning experience in one of the Museum’s STEAM classrooms. Educators will discuss a STEM-related principle and then guide the students as they try out their new knowledge.

The west half of the National Air and Space Museum’s other location in Washington, DC will reopen on October 14. Educational programs and tours will resume in the 2023-24 school year.