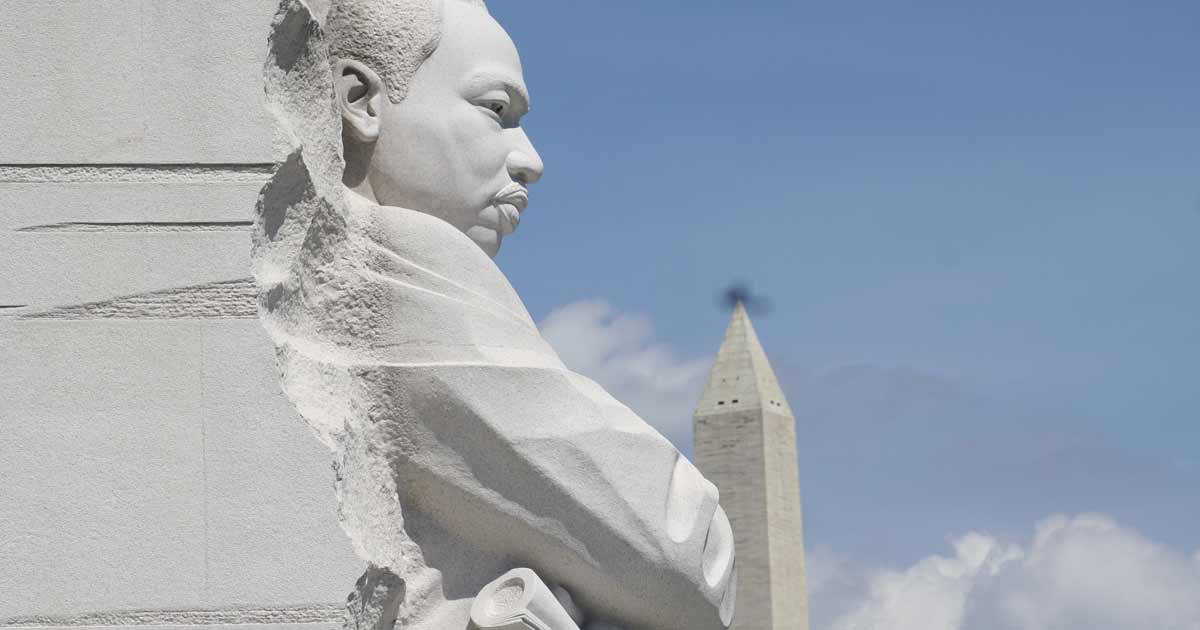 An annual federal holiday since 1986, Martin Luther King Jr. Day celebrates the civil rights leader who was instrumental in the Civil Rights Movement and challenging racial injustice. Though traveling may be difficult at the moment, there are still several ways to learn from afar—today and every day—about Dr. King and his messages.

Before we dive in, reflect on the meaning of the holiday, as written by Coretta Scott King in 1983 for The Washington Post:

“The holiday must be substantive as well as symbolic. It must be more than a day of celebration … Let this holiday be a day of reflection, a day of teaching nonviolent philosophy and strategy, a day of getting involved in nonviolent action for social and economic progress.”

Virtually visit some destinations below, which were integral to Dr. King’s life and legacy, in addition to monuments dedicated to him on the U.S. Civil Rights Trail. You could even begin to make plans to visit these destinations in person once it’s safe enough to do so.

Dr. King was born on January 15, 1929 at 501 Auburn Avenue in Atlanta and would go on to spend his first 12 years there. The home stayed in the family and after his assassination on April 4, 1968, it was restored as a historic museum which usually offers free National Park Service ranger-led tours, though the pandemic has halted those for the time being.

Ebenezer Baptist Church in Atlanta is synonymous with Dr. King. It’s the place where he was baptized, ordained and served as co-pastor with his father until 1968.

The King Center in Atlanta, created after Dr. King’s death, is run by his children and seeks to prepare global citizens to create a more just, humane and peaceful world using Dr. King’s nonviolent philosophy and methodology. It’s here groups could pay their respects at Dr. & Mrs. King’s crypt, and explore Freedom Hall, which houses the Center’s programming and events.

The National Civil Rights Museum at the Lorraine Motel is one of the most important examples of hope rising from pain. Built on the site of Dr. King’s 1968 assassination, this museum traces the history of civil rights from its roots in the slave trade to the present day.

Dr. King’s childhood home, Ebenezer Baptist Church, and The King Center are included in the Martin Luther King Jr. National Historical Park, which also includes the “I Have a Dream” World Peace Rose Garden and celebrated 40 years in 2020 of protecting, planning and preserving Dr. King’s legacy.

Take the time to watch some of the videos below to hear Dr. King speak:

Dr. King’s 1967 speech at Stanford, where expounds on his nonviolent philosophy and methodology.

“What Is Your Life’s Blueprint?” Dr. King’s 1967 speech at Barratt Junior High School in Philadelphia, where he speaks to students about being the best people they can, regardless of their status.

Dr. King’s “I Have a Dream” speech, delivered during the March on Washington for Jobs and Freedom on August 28, 1963.

To continue to delve further into the life and legacy of Dr. King, explore the resources made available by The Martin Luther King, Jr. Research and Education Institute.