Member Login
SYTA»Articles»Imagine the World as One: ‘Come From Away’ Fosters Cultural Awarness, Understanding and Connection
Share This 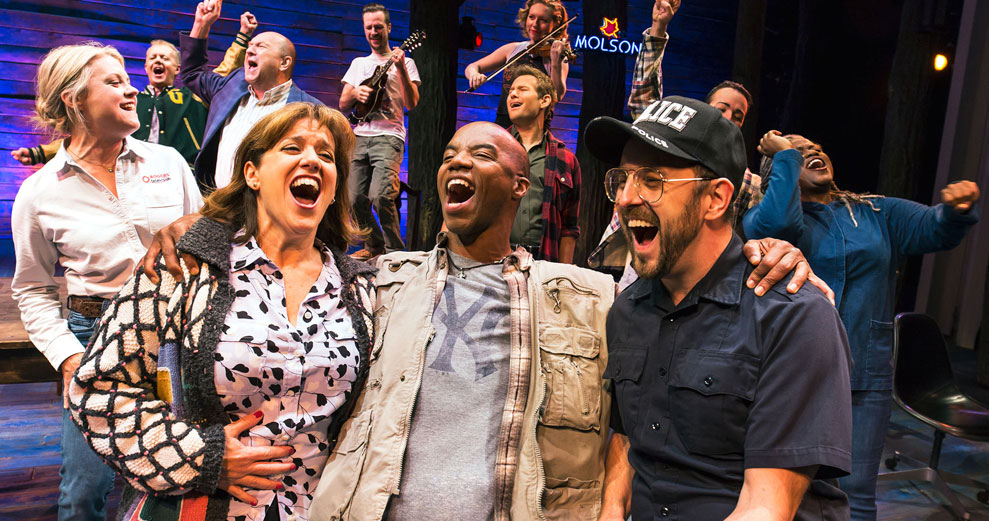 Imagine the World as One: ‘Come From Away’ Fosters Cultural Awarness, Understanding and Connection

Come From Away is the remarkable true story of 7,000 passengers stranded after the September 11 attacks, and the small town of Gander, Newfoundland, that welcomed them. Cultures clashed. Nerves ran high. Yet uneasiness turned into trust—and gratitude turned into enduring friendships.

Kasie Smith, president of Serendipity Media and publisher of Broadway Spotlight and Teach & Travel, offers an inside look at what Come From Away offers groups.

What do you love about Broadway?

I’m a bit of a Broadway nerd. I’ve been very fortunate to see shows that have great meaning and good scores. You know, you go to a movie and see a great movie … and what makes a great movie is the ebb and flow of the script. I think the same thing applies to Broadway. But when you have the opportunity to see a show that wins “Best Musical,” you can see why. Some of the most talented performers grace the stage. To see it live elevates the experience.

Why did you decide to see Come From Away?

Group Sales Box Office brought the real pilot portrayed in the musical onstage for a Q&A at the Student & Youth Travel Association (SYTA) Conference in 2017. Having the opportunity to see her and hear her firsthand account—the entire experience surrounding 9/11—made the show become so much more than the story.

She was the first female captain at American Airlines, which is a huge feat in and of itself. All of a sudden, the show became about female empowerment. About understanding the experiences related to 9/11. About communities and different people coming together.

Having met her, it was so much more real watching it.

How does Come From Away stand out from other shows?

The ensemble cast is small. Each actor played three or four characters. Every time the scene changed and people changed characters, they were all believable. You could easily follow it. But it was just a different dimension.

There was a point in the show when the captain plays a character from the town who is drooling over a gentleman. The next thing, she’s the assertive captain from the plane. The dynamic shift in that is pretty tremendous. They shifted the scenes. They shifted the cast. It was constantly moving and constantly telling the story from a variety of different perspectives.

I went into this thinking it was a story about 9/11. While the events took place on 9/11, it was really a story about community. A story about people from all walks of life and backgrounds being put together in this little town and creating a culture of awareness about others.

I think that part was what made it a spectacular show, walking away.

Why is Come From Away great for all groups?

Part of the beauty of travel and Broadway is that it exposes us to new things. I think this show really represents that at the core, through the cultural differences of other people.

It doesn’t matter if you’re a student group or a senior group: Come From Away‘s lesson is so valuable.

The story wasn’t about 9/11, but it did come up. I remember the entire day vividly in my mind, exactly where I was and the conversations I was having. For all the people who don’t remember, I think Come From Away does a good job creating a real sense of history related to the events of 9/11.

I think people, from a historical perspective, know the facts. What people don’t know is the impact 9/11 had on communities of different cultures. More so, the feelings and emotions. The uncertainty. The lack of understanding and the need to, all of a sudden, trust new people who look different from you.

That’s what I think this show really brought together. You could see people being forced to be together. They were all put together and had to find commonality. They all had to live and work together and rely on one another.

And they did that.

And the impact that had on those people: 15 years later, these people still have relationships. It created such a massive impact on the community and those people’s lives.

Think of what the world could be like if people could live like that. It’d be such a better place.

How could educators incorporate Come From Away into the curriculum?

I think educators need to start the conversation before they get there. When student groups see the show, there’s already a planted seed about cultural immersion.

I think that when kids go to New York City, for instance, it doesn’t really matter where you come from. When you’re in high school, it’s a very small silo. Everybody is from the same town. There are so many similarities. Maybe the color of your skin looks a little different, but you’re from the same communities. What the show does is show people from all different walks of life coming together. You see that, but I think you have to have that conversation before—and you need to have that conversation afterward.

This show is a great show to make a theme in a student itinerary. You could do a Broadway workshop or classroom prior to the show that really engages this conversation. Then, combine it by going to the 9/11 Memorial and Museum and furthering this whole experience historically as to what happened.