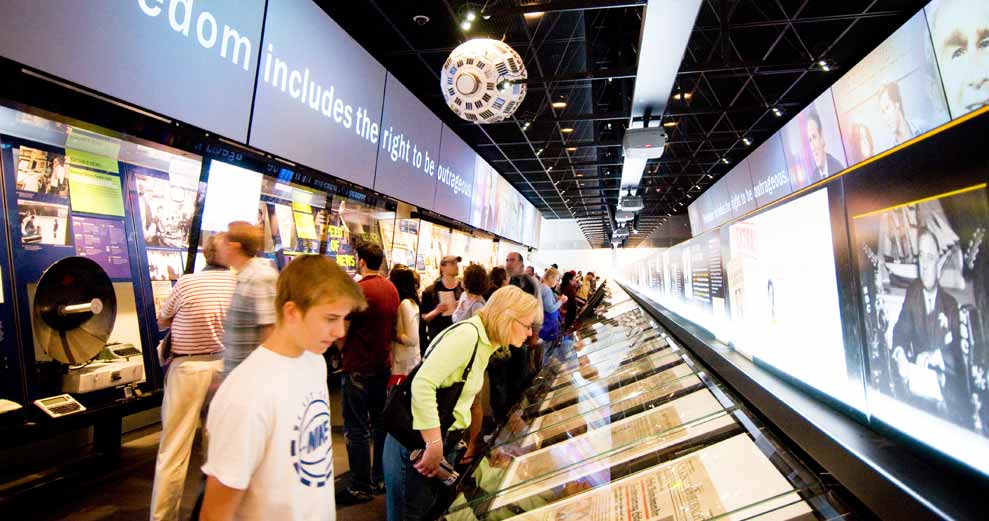 In the Age of Digital Disruption

Technology surrounds us constantly today and has played an undeniable role in how society intakes and digests their news. The Newseum has unveiled a new display exploring digital disruption and how our media landscape has changed—and continues to change.

Youth groups can now explore how the news industry has been transformed by the internet and digital innovation at the Newseum’s new Digital Disruption display inside the popular News Corporation History Gallery. The display covers cover the erosion of local news; the power of Google and Facebook as news purveyors; a look at digital news innovators such as Mark Zuckerberg, Jeff Bezos and Arianna Huffington; an exploration of some of today’s most influential news sites; and a look at fake news, mistrust of the press, Donald Trump and Twitter—as well as threats to journalists.

“Since its arrival in the 1990s, the internet has transformed how news is reported and consumed,” said Newseum executive director, Carrie Christofferson. “This new display will examine the ways Facebook, Google, Twitter and other social media sites have changed news delivery, the impact on news consumers and how digital news outlets are changing the media landscape.”

Artifacts throughout the exhibit include powerful protest posters, buttons, and hats demonstrating how social media is used to unite people behind a cause or to protest injustice, as well as a press pass and notebook used by The Washington Post reporter David Fahrenthold to report on Donald Trump’s claims of charitable contributions that were found to be exaggerated.

Also added to the Gallery is Behind the News: A Deadly Attack on a Community Newspaper, which explores the risks journalists face in an increasingly hostile climate for the press, specifically focusing on the June 2018 attack at the Capital Gazette in Annapolis, Maryland, that left five staff members dead. Students will learn the details of how the tiny staff put out a newspaper the next day and see in person the paper in which the staff reported on their own tragedy.