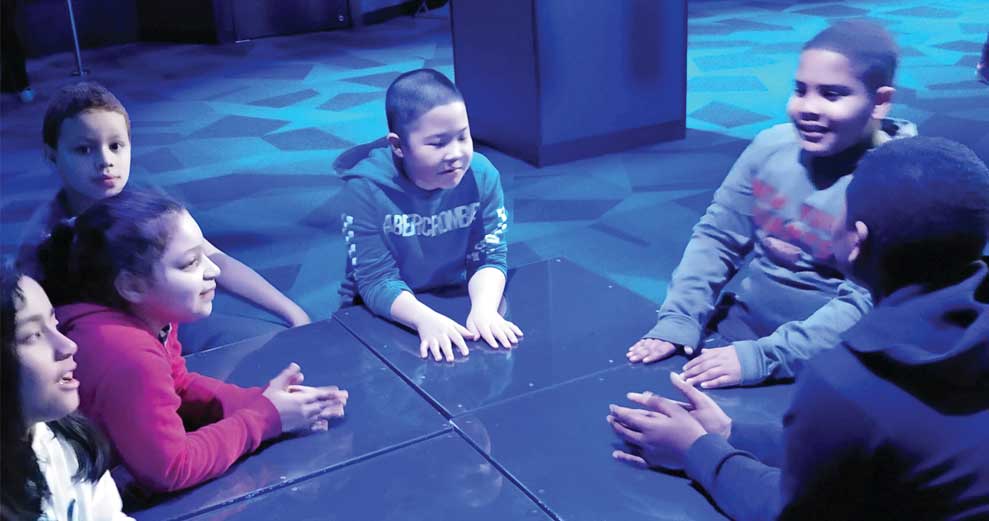 Not Your Ordinary Field Trip

National Geographic Encounter: Ocean Odyssey uses groundbreaking technology to take students on a 3D journey into the ocean. Stacie Stuart, a Computer Science and STEM teacher at PS 97 Q Forest Park in Woodhaven, New York, thought the experience would serve as the perfect complement to her student’s main project this year—Plastic Patrol—which focused on eliminating plastics in the ocean.

“The students learned so much about sea creatures, their habitats and how they survive,” said Stuart, who along with other educators from her school took 120 students grades K-5 on the trip. “The information they brought back was astounding! We’re petitioning the NYC Dept of Education to replace our water fountains with bottle-filling stations and ban plastic bottles from schools.”

The students absolutely loved the 3D experiences, especially the giant whale and dancing sea lions. Stuart notes that many students—and she—felt like they were actually inside the ocean environments.

“There was one part of the tour where the lights went out and the room lit up with fish swimming right under our feet,” she said. “The tour guides were very knowledgeable and gave great facts and details about each area of the ocean we visited.”

A perfect tie to the students’ curriculum was a plastics exhibit after the tour, which sparked concern and interest.

“Students began raising money to provide every student with a refillable bottle and began purchasing metal straws on Amazon,” said Stuart, adding that students also took action by pledging to not use plastic straws; one student even created a public service announcement to make their community aware of the situation. “They also led a schoolwide campaign and created a ‘We’re all a piece of the puzzle’ mural on the wall.”

Pat Murphy, a fourth-grade teacher at the same school, also found the trip illuminating and inspirational.

“My students discussed how they would work together to explore the sea,” said Murphy. “One wants to be a data researcher, one an oceanographer, and another a marine biologist.”

From the start of booking with Alexandria Cammarata at National Geographic to leaving the museum at the end of their trip, Stuart said, everything was a breeze.

“The teachers had links to information and packets to share with the students before the trip, so they would have some background to build upon. They were given plenty of time to explore on each section of the tour and filled pages in their books when they return to school.”

Stuart will remember the students’ smiles, squeals of excitement, and the chatter about what they saw, experienced, and learned.

“National Geographic mixed entertainment with education in a real-world setting.

“It was not your ordinary field trip!”

Sidebar One
Sidebar Two
Topics
Recent Articles
Every Bridge Has Its Story: Sailing Under The Bridges in NYC
Banding Together to Accomplish Anything
‘Shear Madness’ Makes Students Part of the Play
Immersing Students in the Travel Experience
+