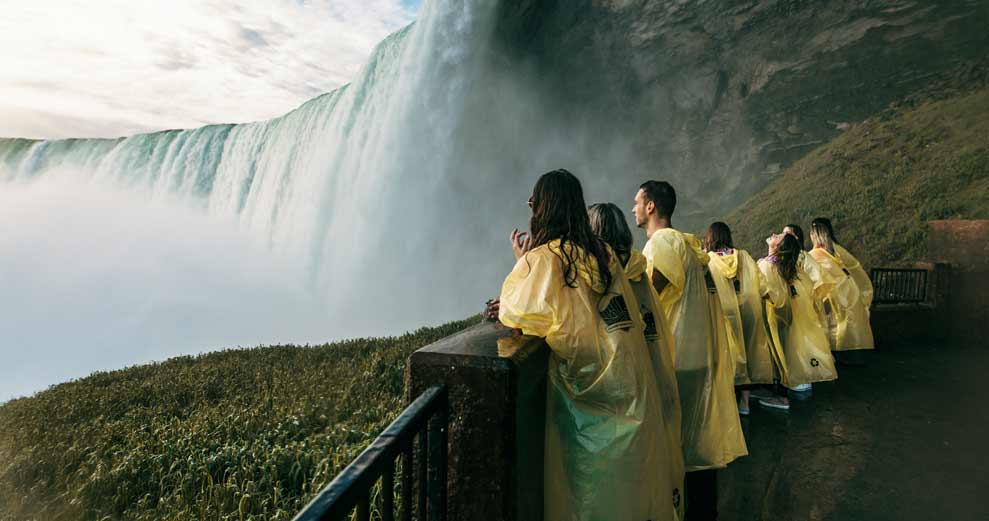 Niagara Falls is spectacular throughout the whole year! There’s always something to see, learn and do during each season. The winter months offer a variety of new and exciting ways to explore Niagara Parks, but there are also fun and interesting indoor activities.

NIAGARA’S FURY
An adventure of a different kind, Niagara’s Fury teaches about the ancient story of Niagara Falls—in 4D! This engaging experience is in a 360-degree multisensory theater. Water bubbles and sprays you as you travel down the river while snow falls all around, simulating the last Ice Age. As you stand on a platform, it moves to help you better understand the sheer power of nature—all the while being surrounded by stunning visuals of the mighty Niagara River.

JOURNEY BEHIND THE FALLS
Temperatures in Niagara Falls typically dip well below freezing in February, creating a layer of snow and ice on the surrounding scenery. It’s quite a sight! To see some of the most spectacular icy views, travel through the 130-year-old tunnels as you “Journey Behind the Falls.” You’ll stand at the heart of Niagara while marveling at the frozen falls in all their glory.

BUTTERFLY CONSERVATORY
There’s something magical about butterflies. These delicate creatures are often a symbol of hope, freedom and joy, which is why it’s easy to feel a childlike sense of wonder when watching them land on a flower. Located at the Niagara Parks Botanical Gardens, the Butterfly Conservatory will transport you to a tropical oasis as 2,000 vibrantly colored butterflies dance above your head.

NIAGARA FALLS ILLUMINATION
Did you know Niagara Falls was first illuminated in 1860? In September of that year, 200 Bengal light flares were launched in honor of the visit of Prince of Wales Edward VII, Queen Victoria’s oldest son. Environmental concerns inspired a shift in 2016 to energy-efficient LED lights, which are currently used to illuminate the Horseshoe and American Falls with vivid, programmable lights in nearly every color!

FLORAL SHOWHOUSE
There’s always something in bloom at the Floral Showhouse! People of all ages always say what a delight it is as they meander through the North and Centre Houses—which are consistently bursting with color. Niagara Parks’ Horticultural Team works hard to keep this lush oasis healthy, while planning seven displays throughout the year to reflect the changing seasons.