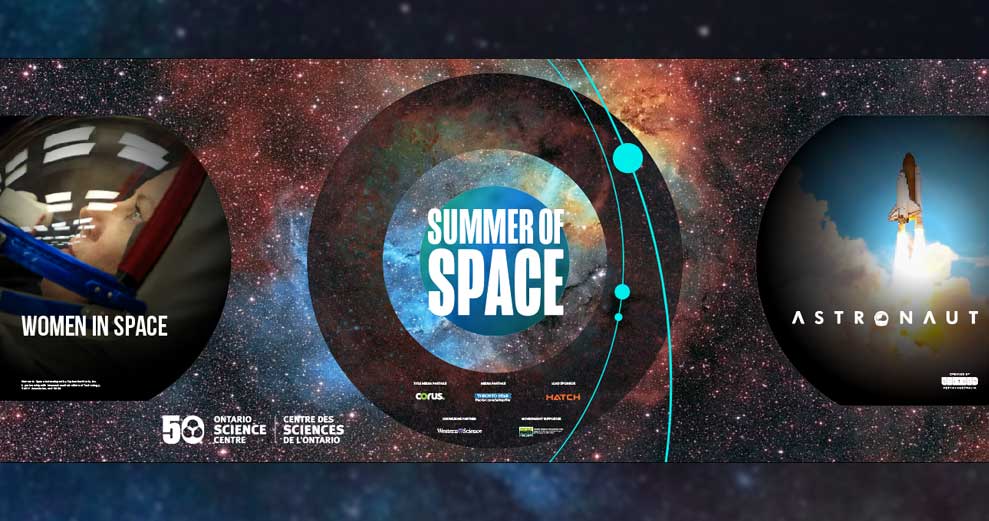 Students can connect to the cosmos this summer at Ontario Science Centre as they celebrate human space exploration with Summer of Space—a celestial lineup of films, exhibitions, programs and special events sure to excite space enthusiasts of all ages.

“Space exploration helps us address fundamental questions about our place in the universe and the history of our solar system, and is a fitting theme this year as we mark two 50-year milestones—the first Moon landing and the opening of the Science Centre,” said Maurice Bitran, Ph.D., CEO and Chief Science Officer, Ontario Science Centre. “Our Summer of Space lineup allows visitors to experience the past, present, and future of space exploration and is sure to inspire the next generation of space enthusiasts and explorers.”

The adventure continues with special exhibitions Astronaut and Women in Space.

Astronaut
What does it feel like to blast off into space and be a space explorer? Could you put a lander safely down on another planet? Students can discover what it’s like to live like an astronaut, including how to sleep, eat, shower and use the toilet in space! Tackle challenges in the astronaut training center, experience a rocket launch, investigate life on the Space Lab and learn how to do science in space.

Through hands-on and full-body displays, this revealing science exhibition investigates the reality of what it takes to be a space explorer. Astronaut relays the physical and psychological effects of living in microgravity on the human body and the technology used to complete a mission.

Women in Space
A captivating tale of space exploration featuring the industry’s brightest female scientists—from Canada and beyond—whose work has helped NASA and the Canadian Space Agency prepare for the future. Students will get to know some of the leading women in the industry, from those involved in deep-sea research to deploying advanced telescopes to inventing the BioSuit.

Once an improbable goal, women-led space exploration is leaping forward and expanding our capabilities with science innovations and engineering technology.

“We have a strong connection to the Ontario Science Centre’s mission to inspire passion for the human adventure of discovery,” said John Bianchini, Chairman and Chief Executive Officer, Hatch. “As the lead sponsor for Astronaut and Women in Space, we applaud how these exhibitions celebrate the people and technologies that have transformed space exploration—and thereby our understanding of the world—and hope they influence children and youth to consider scientific and technical fields for their future careers to solve the world’s toughest challenges.”

The Science Centre expands its Summer of Space with programs, workshops, and events, including a new moon-focused planetarium show, space-themed day camps, and space scientist meet and greets. On July 20, 2019, the Science Centre commemorates the 50th anniversary of the moon landing with special lunar-themed programming, featuring Canadian astronauts.

“Summer of Space will be a superlative kick-off to the Science Centre’s 50th summer season,” said Michael Tibollo, Minister of Tourism, Culture and Sport.

“It’s an exciting lineup that will inspire and engage both visitors from Ontario and tourists from around the world—and another example of the Science Centre’s innovative and interactive programming.”

For more information about the Summer of Space lineup, visit Ontario Science Centre.