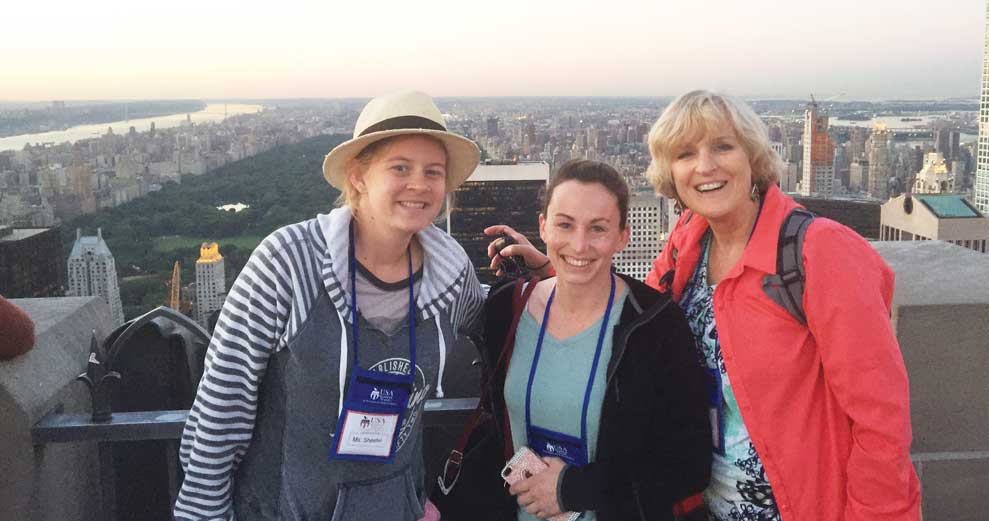 Susan Atkinson, with Herbert Green Middle School in Placerville, California, will be the first to tell you about the value of student travel. After all, this teacher of seventh- and eighth-grade Social Studies, Technology, and Leadership has been taking students from the school and its surrounding area on an annual East Coast trip for the past 22 years.

“The teacher who held the position before me took students on East Coast trips traveling with a local tour company for several years,” Atkinson said. “Once I started teaching at Herbert Green, I continued the long-standing school tradition of the eighth-grade East Coast trip. Two other local middle schools travel with us each year.”

Atkinson stresses the importance of planning early, noting it’s helpful to hold planning meetings as soon as you’re able, offering families enough time to raise the appropriate funds over the span of several months. She added that without the help of various scholarships, travel for some students wouldn’t be possible.

“One of my students received a $1,000 SYTA Youth Foundation Road Scholarship. The student’s grandparents, who are raising him, were ecstatic and so grateful!”

When pondering the types of experiences her students are able to take part in throughout the years, Atkinson says she’s sometimes nervous, thinking not all students will be as excited as others. Yet she’s constantly surprised by—and proud of—the outcomes.

“During a recent Broadway Classroom experience, I anticipated having to coax students into singing and dancing because we had a wide range of students with a variety of social and family experiences—some who come from challenging home experiences or don’t participate in extracurricular school activities.”

That was anything but the case.

“Each of the students literally stepped up, singing and dancing to challenging choreography from the musical Wicked. After seeing Wicked the same night, students re-enacted the dance we learned, during the bus ride back to the hotel.”

After all this time, Atkinson remains enthusiastic about planning and executing the annual trip. She’s eager for students to experience different places and cultures—immensely broadening their worldview.

“We live in the rural Sierra foothills and the population of our area does not represent the diversity of the United States. For many of our student travelers, the East Coast trip is the first time they’ve had the chance to be on an airplane.

“I’ve seen students gain confidence in themselves because of traveling.”

Taking students to the places where history happens makes a noticeable difference, one Atkinson has seen and continues to witness—whether they’re seeing the actual documents, rather than replicas, that formed the U.S. at the National Archives in D.C. or climbing inside a statue that represented the box Henry “Box” Brown used to escape enslavement in 1849.

“I know my students have made the connections I had hoped for. Without traveling, the best I could do in the classroom was showing students pictures and gift shop reproductions.”

Atkinson recalls several stories about how student travel provided immediate educational benefits for her students and offered a window to their future. One such includes a student’s revelation while visiting Georgetown University during a school trip.

Another story Atkinson recalls took place while walking through scenic Central Park in New York City. That student shared her goal of attending Juilliard and was thrilled to finally get to see the school in person.

Atkinson plans to continue to spend valuable time and effort planning trips such as these. Though the outings are always great fun, she knows their impact lasts far beyond when her students hop off the bus after they return home.

“My hope is that students will realize that there are many opportunities out there for them beyond our own small community.”