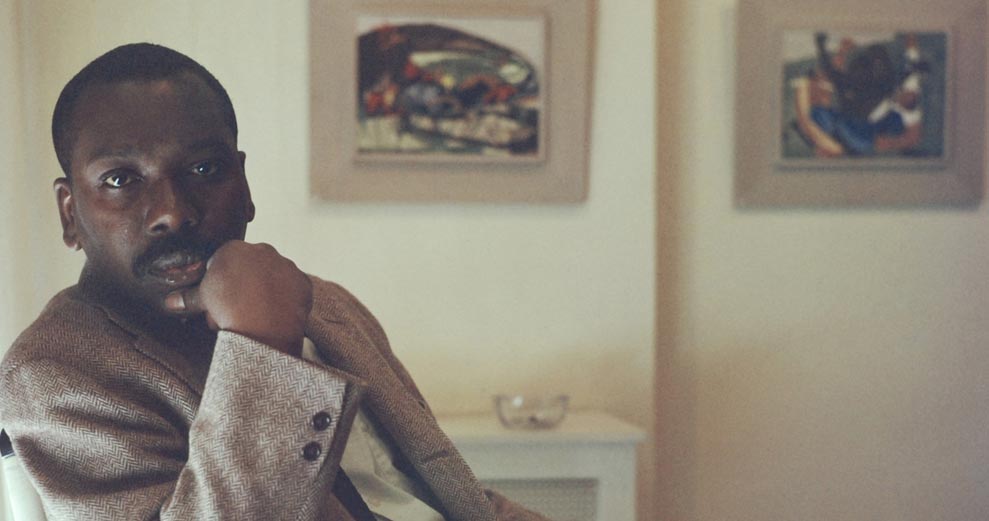 Now at the Peabody Essex Museum, students could view the debut of Jacob Lawrence: The American Struggle. PEM is the first museum exhibition to feature the celebrated series of paintings Struggle: From the History of the American People, painted during the civil rights era by Jacob Lawrence, one of the best-known black American artists of the 20th century.

The series of 30 intimate panels depicts pivotal moments in early American history with an emphasis on the contributions that black people, Native Americans, and women made in shaping our nation’s founding and identity.

The exhibition tackles a question central to Lawrence’s work:

“What is the cost of democracy for all?” 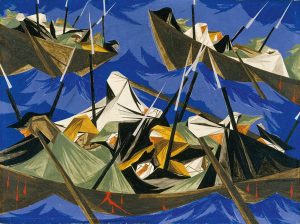 Reunited for the first time in more than 60 years, the Struggle series brings American history to life through energetic, expressive paintings that hug the boundary between figuration and abstraction. For this reunion, 25 of the Struggle paintings are accounted for while five remain unlocated. Of these, the known works are presented alongside reproductions of the missing paintings as well as those too fragile to travel. The paintings reflect Lawrence’s desire to “express the universal beauty of man’s continuous struggle” and his visual style conveys the physical, emotional and ideological struggles inherent to the country’s founding.

Born in 1917, Lawrence broke through the color line of New York’s segregated art world when, at the age of 23, he created the Migration Series, a historical narrative that was instantly recognized as a masterpiece and became the first work by a black artist to be acquired by the Museum of Modern Art.

“This truly historic exhibition offers a rare opportunity to encounter Lawrence’s greatest and least-known works while considering our own relationship to the ongoing struggle for life, liberty and the pursuit of happiness,” said Lydia Gordon, PEM’s associate curator. “His work continues to influence and impact so many today because his messages are urgent, pressing and timeless.”

The artistic training of Lawrence, one of the most prominent and celebrated black artists in America in the 20th century, was fostered by the luminaries of the Harlem Renaissance and inspired by the stories he heard from elders about the abolitionist movement, black heroes, and familial struggles. Because of the lack of black history taught in American schools, Lawrence chose his early work to depict iconic figures like abolitionists Frederick Douglass and Harriet Tubman. 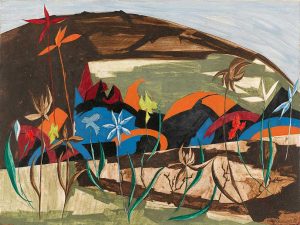 With a style that was expressive and symbolic in form, Lawrence combined Social Realism and modern abstraction to create pared-down compositions brimming with vitality and graphic strength. Lawrence went on to create compelling, often metaphorical stories of the black experience and the history of the United States, including the great migration of black communities from the South to northern cities like New York and Chicago.

By mid-century, Lawrence had perfected his narrative invention of using modestly scaled panels to tell a sweeping epic. In 1949, the national political climate was fraught, freedoms were under threat, and the civil rights movement was gaining momentum. In this context, Lawrence began his research for Struggle: From the History of the American People, a narrative that sought to visualize a more complete—and more complex—version of American history. His goal was to “depict the struggles of a people to create a nation and their attempt to build a democracy.”

Lawrence spent countless hours at the 135th Street branch of the New York Public Library (now the Schomburg Center for Black Research and Culture) in Harlem, poring over historical texts that included first-person accounts, letters, and coded messages from individuals on all sides of the American Revolution. For more than five years, he read and researched; then, in May 1954, just as the Supreme Court ruled to desegregate American schools, he began to paint.

The struggle for democracy is as relevant today as it was during Lawrence’s life. Artists Hank Willis Thomas (b. 1976), Bethany Collins (b. 1983), and Derrick Adams (b. 1970) add their contemporary perspectives to the exhibition through the presentation of recent work.