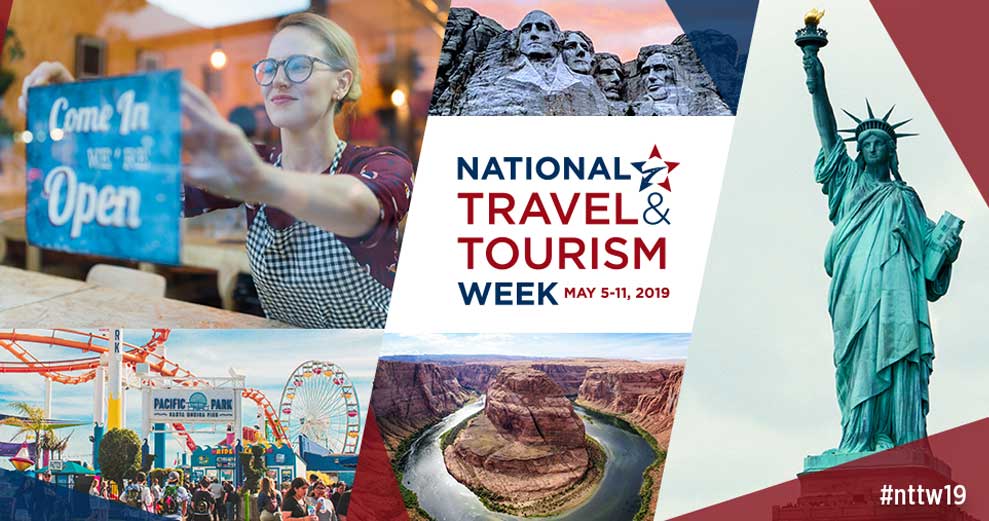 Established in 1983 by President Reagan, National Travel and Tourism Week (NTTW) is the annual salute to travel in America. From May 5-11, communities nationwide unite around a common theme to showcase travel’s contributions to the economy and American jobs. This year, the travel industry is coming together to celebrate why “Travel Matters,” spotlighting a different way travel matters each day to American jobs, economic growth and personal well-being.

Travel matters to the economy.
Travel generated $2.4 trillion for the U.S. economy in 2017 across all U.S. industries. Tax revenue from travel spending for federal, state and local governments totaled $165 billion in 2017, and without these travel-generated tax revenues, each household would pay an average of $1,300 more in taxes every year to maintain the same level of services. One of the best-performing U.S. exports largely flied under the radar: inbound travel—which generates a $77 billion trade surplus for America’s economy.

Travel matters to new experiences.
From national parks to diverse cities and scenic small towns, travel is uniquely made in America offering unique experiences for every traveler. Regardless of age, when asked what they would put on a bucket list of things they wish to accomplish, 88 percent of Americans placed traveling to new places at the very top. More than two-thirds (72 percent) of American adults would rather spend money on experiences than things.

Travel matters to our jobs.
Travel supported 15.6 million American jobs in 2017 across all U.S. industries—that’s one in nine American jobs, making travel the seventh largest employer in the private sector. Travel is an essential contributor to America’s workforce, providing an opportunity and a path to prosperity by allowing many Americans the flexibility to gain experience, pursue higher education and develop transferable skills. With 83 percent of travel companies considered small business, travel drives small businesses across America.

Travel matters to keeping America connected.
Travel infrastructure, from our airports to our highways and our rail system, is critical for growing travel to and within the United States. However, over the past decade the state of travel infrastructure is not keeping up with demand.

Within the next five years, Labor Day-like traffic will plague U.S. highways on a daily basis. If congestion continues to grow at its current pace, 38 percent of travelers would avoid between one and five trips each year. Avoiding just one auto trip per year would cost the economy $23 billion in spending, which directly supports 208,000 American jobs.

Within the next six years, our nation’s top 30 airports will experience Thanksgiving-like passenger volumes on a weekly basis. In 2016 alone, Americans skipped more than 30 million air trips due to airport hassles, costing our economy more than $24 billion.

Travel helps keep America open and connected to the rest of the world, serving as an important tool for public diplomacy. Approximately 76.9 million inbound travelers visited America in 2017, with 38.9 million coming from overseas. Spending by these visitors supports 1.2 million American jobs.

Brand USA, the public private partnership responsible for promoting the U.S. as a travel destination, has a proven track record of boosting the economy and creating American jobs. Established by the Travel Promotion Act, Brand USA is up for reauthorization this year and must be renewed so we can continue to enjoy its many benefits. Of course, without security there can be no travel, but there are several gold-standard programs in place that securely and efficiently facilitate travel, including the Visa Waiver Program, Global Entry and Preclearance.

Travel matters to families.
Travel helps families connect, creating everlasting memories and develop a lifelong bond. When surveyed, most children (61 percent) say the best way to spend quality time with parents is on vacation. At their core, adults know this: 62 percent of adults say that their earliest, most vivid memories are of family vacations taken between the ages of five and 10.

Spread the word and celebrate how “Travel Matters” with resources from the U.S. Travel Association.