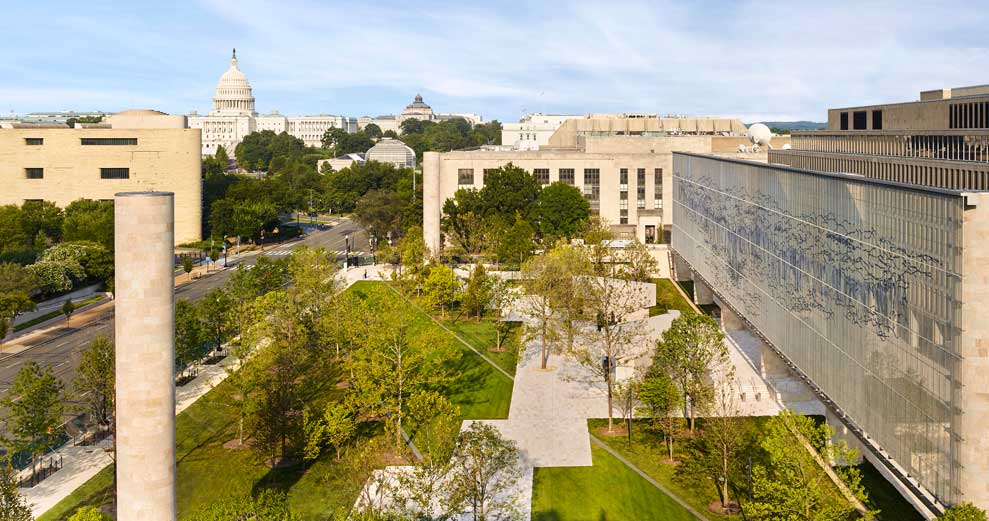 Is there any more quintessential class trip than a trek to Washington, D.C.? For decades, student groups have engaged in this rite of passage, traveling to the nation’s capital to explore history, politics, art, architecture, and more.

When visiting the District of Columbia and its surrounding areas, students could catch a glimpse of the inner workings of government institutions, learn about the legacy of the founding fathers, marvel at iconic monuments, buildings, and structures, view famous works of art, and take in hundreds of activities and attractions, many of which are free.

The Smithsonian Institution, with its 17 museums, galleries, and a zoo within the museum and research complex, is an absolute must-visit for student groups. 2021 marks its 175th anniversary, and plans for World’s Fair-esque festivities are in the works. In fall, the Arts & Industries Building, the Institution’s original site, will reopen to the public with the Futures exhibit, which will have on display prototypes, robots, speculative fiction, and new worlds, as well as other showcases. The family of museums has plans to join the commemoration with their own programs. An official announcement with details is expected to be announced in February.

The Kennedy Center also has an anniversary to celebrate, as it turns 50 this year. A renowned performance space and dynamic cultural hub dedicated to John F. Kennedy and his vision to advance performing arts in the US, it presents world-class performances and concerts as well as a wealth of arts education opportunities. Be sure to check out the REACH campus, the Center’s newest addition, that’s part living theater, part collaborative space, and part immersive learning center with an inclusive “open stage.”

It’s a banner year for The Phillips Collection as well, and an apt time for students to dive into the realms of modern and contemporary art, as America’s first museum of modern art embarks on a year-long centennial celebration. The collection is home to more that 6,000 works, by well-known artists such as Georgia O’Keeffe, Paul Cézanne, Alexander Calder, Pierre-Auguste Renoir, Mark Rothko, and Jacob Lawrence—to name a few.

No student group itinerary would be complete without a visit to Arlington National Cemetery. Tour 600+ acres of burial grounds that are the final resting place for those who have served and sacrificed for our country. Overlooking the Potomac River, it’s a space of natural beauty and well as deep reflection. While on site, make a stop at the Tomb of the Unknown Soldier and witness the meticulous routine of the changing of the guard.

Students could also walk the same halls as notorious court justices, as self-guided tours of the public portions of the Supreme Court building are allowed. Educational programs include courtroom lectures, court-related exhibits, and a visitor film. Though the Library of Congress and National Archives are not currently open to the public, when they do re-open, they are both excellent resources for learning more about the Constitution, as well as civics and government in general, plus history and humanities.

Without question, groups will want to get a peek of the White House façade, and the view from Lafayette Square Park is said to be the best vantage point. The seven-acre expanse is located within President’s Park and is home to a number of statues, including the famous Andrew Jackson Equestrian statue. The park also features several fountains, plus walking paths and benches for taking a sightseeing break.

Among the new memorials is the Dwight D. Eisenhower Memorial, designed by architect Frank Gehry, which encompasses a four-acre park punctuated by green spaces, sculptures, architectural elements, and a stainless-steel woven tapestry of the cliffs at Pointe du Hoc in Normandy. There’s also the National Native American Veterans Memorial, which opened on Veteran’s Day in 2020 and is dedicated to American Indian, Alaska Native, and Native Hawaiian veterans. In the works, but not yet completed, is the National World War I Memorial. Located outside of the National Mall near the White House, it memorializes the 100th anniversary of the ending of the war and the millions of men and women who served.

2020 was also a year of openings for new museums. Planet Word, which recently opened inside the historic Franklin School, is an ideal stop for student groups, with its dedication to language, reading, and the love—and power—of words. It’s the world’s first voice-activated museum, with engaging, interactive displays and exhibits that bring language to life. The National Museum of the US Army, located outside of D.C. in Fort Belvoir, Virginia, also opened on Veteran’s Day last year. It is a tribute to past, present and future U.S. soldiers—from the regular army to the army reserve and the army national guard—and celebrates more than 245 years of army history.

Note certain attractions in the District of Columbia are temporarily closed, especially those that are primarily indoor spaces. Itinerary coordinators should check the sites for updates and plan accordingly. In the meantime, educators are encouraged to engage with the Learning on Location video series offered by washington.org. Quarterly episodes focus on specific topics, and aim to educate students and inspire future travel to the US Capital. The first in the series discusses the history and importance of voting. The second covered Black History Month. These creative tools also spotlight D.C. destinations and are accompanied by a discussion question and resource sheet to further spur conversation.

Photo courtesy of the Eisenhower Memorial.